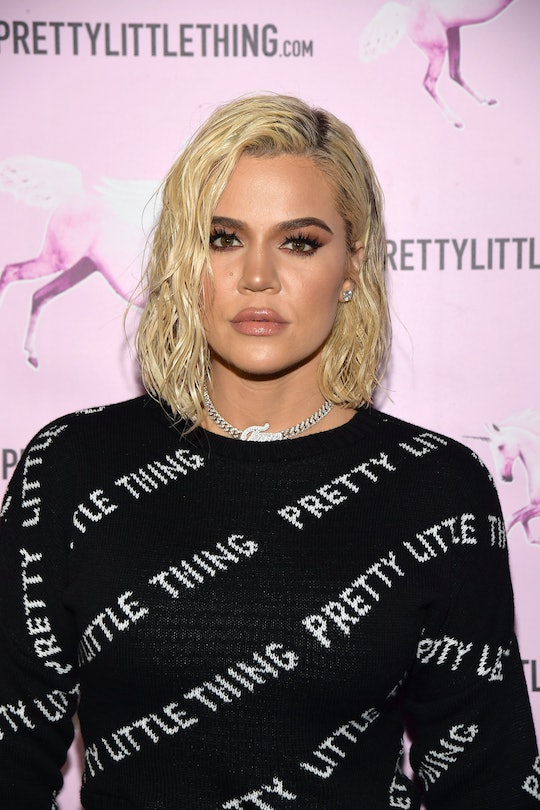 Khloé Kardashian's Emotional Message About 'Betrayal' Will Break Your Heart

If you've been, well, anywhere on the Internet in the past 24 hours, you've probably heard the rumors that Khloé Kardashian and Tristan Thompson have split for good, following allegations that he hooked up with Kylie Jenner's BFF, Jordyn Woods. Whether or not it's true, there's something we do know for sure: Khloé has been posting emotional messages, and one in particular stands out: "That betrayal was a blessing."

Only hours after The Hollywood Unlocked first reported that Tristan and Jordyn were seen hooking up at a house party — at which they purport to have had a writer present, so they can confirm — a slew of social media moves were made that seem to be subtly nodding to the news. For example, Khloé first replied to the story on Instagram with ~shouting~ emojis, EXTRA reported, and family friends Malika Haqq and Larsa Pippen did the same, Cosmopolitan later reported. As of this morning, Kim Kardashian West had also unfollowed both Jordyn and Tristan, People reported.

However, Khloé is clearly processing the news, or rumors, in her own way, as she took to her Instagram story to share some emotional quotes. “The worst pain is getting hurt by a person you explained your pain to,” People reported the first quote read. “Somebody needs to hear this… That betrayal was your blessing," said the next.

Does that necessarily mean she's referring to what happened between Tristan and Jordyn? Well, without specification or confirmation, it's impossible to say for sure. But it does seem odd that such a perfectly applicable message would be posted as such an opportune time.

Of course, this is not the first time that Khloé and Tristan have made headlines for struggles with infidelity. It all started last year, when The Daily Mail and TMZ both purported to release footage of Tristan having affairs with multiple women, entering and exiting clubs and hotels with them late at night, and then the next morning. If that doesn't sound bad enough, it came at the wrong timing, too: while Tristan was out, Khloé was in Cleveland, days away from delivering their daughter, True Thompson.

However, despite that, Khloé made the decision to stay with Thompson, citing the future wellbeing of her daughter. In fact, this past November, when the entire situation was being replayed on TV for the family's show, Keeping Up With the Kardashians, Khloé tweeted the following:

I wanted to have a beautiful birthing experience for myself and for the memories of what I choose to share with True when she’s older. I want her to have videos and pictures of her daddy there, holding her etc. I want her to know she is LOVE and my happiness! Babies feel energy.

Though Kardashian is clearly staying strong for the sake of her daughter, she's also been open about the fact that choosing to heal a relationship in which you have been so badly betrayed is not easy. When a fan criticized her for doing so, E! reported she replied to them on Twitter: "You have no knowledge of what goes on in our household or the enormous rebuilding this takes to even coexist. I'm proud of my strength. I appreciate your opinion and I hope you hold that same opinion to everyone else who has stayed in situations."

Be that as it is, any mom who has been through a similar situation can probably attest it is not so black-and-white as it seems. But, at this point, it's likely that the couple have called it off for good; not only has he cheated again, but purportedly with someone very close to the family. All in all, Kardashian is showing everyone what it means to stay strong, despite the hardest circumstances.