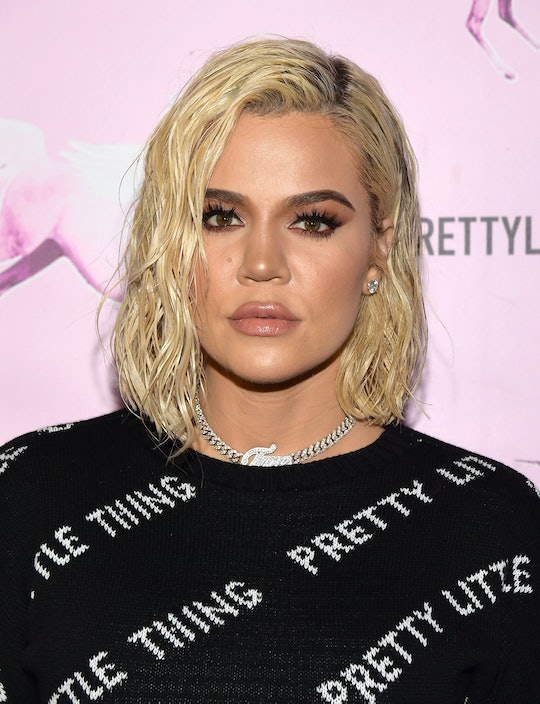 People just love getting mad at a Kardashian and then defending them and then getting mad all over again. It's a real mood. Each sister seems to get a turn on the merry-go-round, and while Khloé Kardashian seemed to be pretty much safe all the time for awhile, that's not true anymore. Probably because now she's a mom and people also love to be mad at famous moms. One thing that comes up a lot? Khloé's nails. They're very long, and people think that's bad for babies. Well guess what? Khloé Kardashian's secret for buckling car seats with long nails is seriously genius, so it looks like people will have to figure out something else to be mad about for awhile.

Khloé is mom to 11-month-old daughter True, and shares her with ex-boyfriend Tristan Thompson. She is clearly completely over the moon for her little girl, but guess what? She still likes some of the stuff she liked before she became a mom and that's actually allowed. Like long nails, for instance. The Good American designer has always been a fan of long nails. She once said on Keeping Up With The Kardashians that long nails give her energy, and she probably needs all the energy she can get as a mom.

Ever since giving birth to True, Khloé has been under fire every time she shares a picture of her super glamorous manicure. Back in February she was super proud of a red manicure and moms were just not having it.

While some people commented positively on her Instagram feed there was a whole lot of judgment, not to mention questions about how she could possibly get anything done with her baby and those nails.

How can you take care of the baby with those claws..😯

Seriously . How do you get anything done with those claws?

For all those parents who have been losing sleep with worry over True's fate, you can finally rest easy. Because her mom reportedly uses this nifty device called the Car Seat Key by Namra, which is described as:

A simple, yet effective solution to release your child with ease. It easily slides over the red button on a child's car seat and with slight pressure, it releases the harness. The Car Seat Key is consumer-proven to make it easier for people with arthritis, carpal tunnel, long nails and more.

The Car Seat Key is only $15 and is available on Amazon with a 4.2 approval rating, and the beauty of it is that it's great for so many things beyond long nails. Grandmothers with arthritis can get a grip on baby's car seat more easily, adults with carpal tunnel syndrome, or just parents trying to deal with a squirmy baby which is basically all babies.

So keep those long nails, everyone. It turns out in 2019 you get to have a baby and also make choices about your own fingers. Hallelujah.