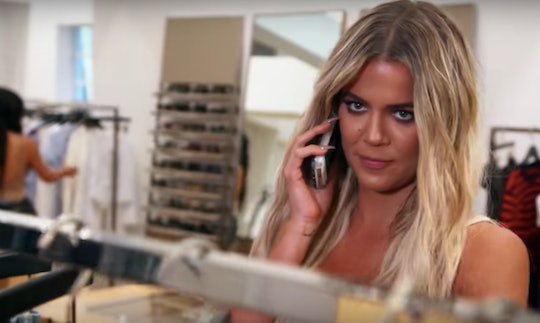 Anyone with a big family knows that the dynamics can be hard to navigate, which is why watching the Kardashians can be a hard habit to break. No one had people talking more this year than Khloé Kardashian, who was pregnant and at the center of a cheating scandal, and Kanye West, who scandalized people with his tweets and political views. However, it seems like everyone is getting along, despite the mayhem, if Khloé Kardashian's new tweet about Kanye West's new album is any proof.

West released a seven-track album called Ye on Friday and it already has fans and critics talking for a variety of reasons. On Saturday, Khloé tweeted out "Ye" with just three fire emoji, apparently showing that she had listened to the album and loved it — even though the rapper addresses the cheating rumors surrounding Khloé and boyfriend Tristan Thompson's relationship, which is something that some fans might assume would've bothered her.

On the album, on the track, "All Mine," West raps:

All these THOTs on Christian Mingle / Almost what got Tristan single / If you don’t ball like him or Kobe [Bryant] / Guarantee that b*tch gonna leave you.

Aside from calling Khloé the b-word, just those two bars are almost more than anyone else has said about the cheating rumors since they broke, aside from Kim Kardashian's appearance on The Ellen DeGeneres Show. (Representatives for Thompson and Kardashian haven't responded to Romper's request for comment regarding the allegations of cheating.)

Many fans were mostly confused because she had posted a video earlier in the day in which she's listening to Taylor Swift, who has had loads of beef with both West and Kim in the past few years. In the video, as Cosmopolitan reported, Khloé is at the gym saying that she doesn't have any motivation to work out and wants to know what other people do. But she's really quiet at moments in the video, in which you can hear Taylor Swift's "Delicate" loud and clear.

Now — there are a few possibilities here. The first, and frankly most likely, is that Khloé was in the gym with her trainer and music was playing that she had no control over. It just happened to be T-Swift. The other options are a little more insidious. Knowing what she does about Kanye West and Taylor Swift's feud with each other, it could have been a slick way to show him that she wasn't all about his new album or mentioning her life on it. Another possibility? She might be trolling all of us by not commenting right away on Ye's album, listening to Taylor Swift, and then also celebrating it on Twitter, just to get us all talking. To be honest, that last option is a very good bet.

What Do You Think?

At least on Keeping Up With The Kardashians, Khloé has always supported her sister's marriage to West and his work. Her first husband, Lamar Odom, was very close to West, so it's likely that the rapper's also befriended her new boyfriend, especially now that there's an adorable baby involved. If there's one thing the Kardashians and Jenners don't mess around with, it's family.

But that doesn't mean that West wasn't making a pointed accusation in "All Mine" when he raps about Thompson allegedly being unfaithful. Kim is the only other family member that's addressed the rumors, too, saying that the whole reported problems between Khloé and Thompson were "just so f*ked up," according to her interview with DeGeneres. She added that she was worried about her sister, even though Khloé is usually pretty strong. Kim told DeGeneres:

When she's gone through really tough things in the past she's always kept that from us and kinda dealt with it until it became public. You know, stuff with Lamar [Odom, her ex-husband], things I guess were happening for a year and we didn't know about it and we always think we're so close but she does such a good job at keeping that so private.

Since keeping things private is what Khloé seems to be all about, she might have taken some issue with Kim and West speaking for her. But jamming out to T-Swift at the gym and throwing out fire emoji for her brother-in-law isn't exactly a scandal. The Kardashians wouldn't let a rap verse get between them.