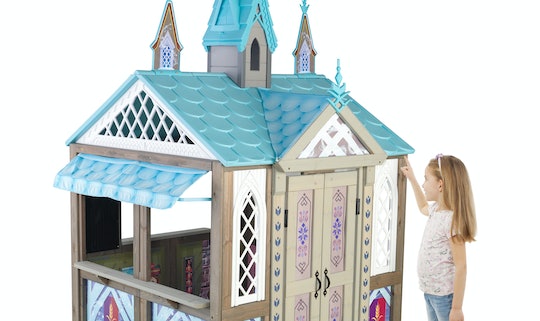 Frozen 2 will be released in movie theaters in just about a month from now, and if you’ve got a mini Elsa or Anna in your life, that means one thing. There's going to be an avalanche of toys that your kid is going to want. But the KidKraft Disney Frozen Arendelle Wooden Playhouse just might top them all, since it's totally fit for a frozen queen in your own life.

Sold exclusively at Costco.com, the KidKraft Disney Frozen 2 Arendelle Wooden Playhouse is a pretty substantial size. It’s 53.46" x 49.61" x 81.5", which means that it’s big enough for a kid (or two) to fit into at one time. They can play together and share the castle without squabbling with each other — or, you know, accidentally setting off an eternal winter.

Double doors can open for the grandest of royal entrances, and the canvas roofline extension makes the playset appear even more regal. It can also offer some shade if your child is playing outside, since the sides and back of the castle are open-air. There are planter boxes on the outside that you could fill with fake flowers, but you could also give your kid the royal treatment and buy some real beautiful buds instead.

Hand the kids some chalk, and they can decorate the two chalkboard insets that are on the side of the playset. They might even decide to draw pictures of their favorite Frozen characters and practice writing their names.

While it’s totally decked out on the outside, there aren’t a whole lot of bells and whistles on the inside of the playset, and that’s what makes it awesome. Apart from some posters that attach to the inside walls that depict the bedroom, the royal library, and a living room, that’s about it in terms of décor. The wooden playhouse allows room for imaginative play and will inspire kids to come up with new adventures. Perhaps they'll envision frozen fractals all around, or have to keep the castle safe from that horrible Prince Hans of the Southern Isles or dastardly Duke of Weselton.

Although the mock castle is designed for ages 3-10, you know that you’re going to be spending quite some time in there, too, momma. You might find yourself having tea or eating some delicious chocolate, which Anna and Elsa both love. And don’t be surprised if your child wants to grab a sleeping bag and snooze in there, too. It’s a place where your child can feel like royalty — literally.

If you do decide to keep the playset outdoors during the winter, your child can recreate scenes from the film, and the answer to “Do you want to build a snowman?” will be always be a resounding “Yes.” And when it gets warmer, you can schlep it outside for some springtime princess playtime. A willing brother can easily sub in for Kristoff, and the family dog can be Sven — if you can get them in costume, that is.

At $370, the KidKraft Disney Frozen Arendelle Wooden Playhouse is definitely the big ticket present among all of the other Frozen 2 toys you're going to shell money out for this holiday season. But that might not matter all that much when you realize how many amazing memories you’re going to create together. And when the day comes that (sigh) your little girl outgrows her wooden playhouse, you’ll find that you’ll be the one who won’t want to let it go.