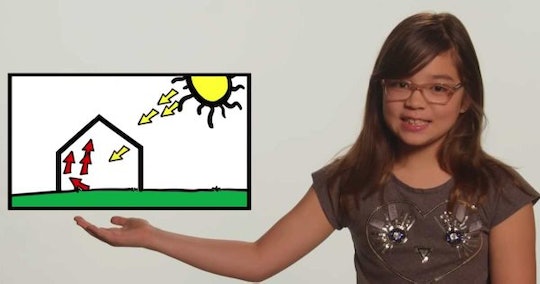 The terrible weather has become perhaps the main topic of conversation for most people in recent days as the polar vortex has temperatures in the midwest plummeting to historic lows. Everyone is cold and frustrated and tired from all the grey skies and relentless snow, and no one is in the mood to deal with the president, who made it clear that he doesn't actually understand the concept of climate change. Fortunately there's a tiny bright spot: this video of kids explaining climate change to Trump. They even used pictures to make it easier for him to understand.

Earlier this week President Trump decided to weigh in on the polar vortex that has been leaving much of the midwest buried under snow and ice and dealing with subzero temperatures on a daily basis. Of course, when he weighed in he decided to take that opportunity to mock global warming and continue to insist that climate change is a hoax (as he's done for some time), as per Vox. This time around, the president issued something of a plea for "global waming" to return because it's simply too darn cold in the midwest, and because I guess he's never read even the shortest article about climate change. Or grammar.

Trump has since been widely criticized for his tweet, obviously, as Bored Panda reported, but I don't think you've ever quite been corrected until you've been corrected by children who clearly know more than you. And so it was that Jimmy Kimmel invited some children to explain climate change to the Commander-in-Chief in a video for Jimmy Kimmel Live.

As the two kids explained to Trump in the video (using their most hilariously condescending voices, which honestly made the whole thing better), climate change isn't just about global warming. Climate change is caused by the greenhouse effect that was initially discovered back in 1859, "even before YOU were born," as they tell the president. They explain how the greenhouse effect works complete with cheerful music and colorful cartoons. Then they break down all of the changes to our climate that end up happening. Like extreme weather, for instance.

No word yet on whether or not President Trump managed to catch this incredibly helpful video from kids explaining climate change. And if he did see it, we have no way of knowing just yet if this video helped to educate the president on the actual science behind climate change.

Of course these kids are by no means the first to react to Trump's tweet. The federal agency National Oceanic and Atmospheric Association corrected Trump's misguided tweet with one of their own on Tuesday.

Here's hoping these two young children can somehow get through to President Trump and help him see the science behind climate change, although I doubt it. I strongly suspect Trump will continue to ignore all evidence of climate change for as long as he can.

Fortunately, I also strongly suspect his denial of climate change won't be our problem any more in about two years.