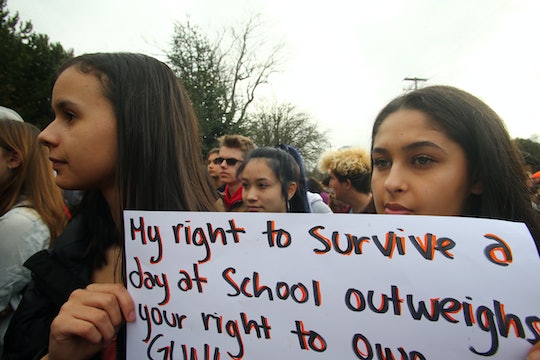 On Wednesday, March 14, thousands of kids across the country walked out of their classes in solidarity with the students of Marjory Stoneman Douglas High School. Due to the truly grassroots nature of these demonstrations, every school's protest operated differently but, generally speaking, they were 17 minutes long in honor of the 17 victims of the shooting in Parkland, Florida. Kids held vigil. Kids demanded better gun control. Kids made their voices heard. Most adults in my orbit were supportive, but many were anything but, ranging from derisive to enraged. Many bemoaned the kids' lack of respect.

Online and in real life, I saw many of my neighbors express deep and disdainful concern over our local high school's participation in the national event. Students were accused of being puppets of left-wing propaganda to disarm law-abiding citizens. The school was accused of "indoctrinating" students (despite having nothing to do with organizing the event). Some claimed that the Women's March had infiltrated the student population and was the real power behind the protest. Many shared that hugely problematic "Walk UP Not OUT" meme. And then there was the notion that school shootings aren't a "gun problem," but a "respect problem."

The conversation quickly devolved into a "kids today" discussion, and I'm not buying that nonsense for a minute. Kids today are no different, and no more or less respectful, than they've ever been. The stories my mother and grandmother and even great grandmother told me about their wild and crazy hijinks are on par or wilder than my own. So I sat thinking about what they all mean when they talk about kids being disrespectful and how they think respect is going to solve this problem in and of itself. Respect is great! Respect is good! Respect is absolutely necessary in a fair and civil society, but respect alone isn't going to solve all the issues surrounding gun violence.

This idea was still floating around the back of my mind when I took my 6-year-old son to his first tang soo do class. His teacher was a very nice man who, before running them through some drills and warm-ups, told them what they could expect in class.

"This is your dojo," he said, "And when you come in, before you enter the room, I want you to take your stance and bow. Same when you leave. Because this is a place of respect. You need to respect this space, respect your teacher, and respect your friends."

He didn't say it in an authoritarian, drill-sergeant way. In fact, he was very matter-of-fact and almost gentle. Throughout the class, whenever a student would occasionally say "Yes, sir!" he would respond to them by saying, "Thank you for showing me that respect."

I love this guy. The kids were having a blast, but they were also learning. And not only were they learning techniques (and counting in Korean!), but they were taking in an atmosphere of dignity, accepting challenges, and that word of the day: respect.

What they really mean is: "We don't have total control over our children's thoughts and behavior and we should. They need to listen and obey. They need to show respect."

Then the other teacher came in to set up for the next class.

When she did, my son's instructor took a pause from the lesson to introduce her. "This is Mrs. [Redacted]. She's my teacher. When she comes in, I want you to show her respect, too. So, just like I showed you..."

And the class gave her a bow.

After her arrival, Mrs. X helped my son's teacher by taking a role in instructing the class. Most of the time it seemed fairly unnecessary but I didn't think too much of it. He had mentioned that he normally had the assistance of his two teenage children, so maybe she was picked up the slack I didn't notice. Besides, I thought, it's cool that these little kids, boys and girls, are seeing a female martial arts instructor. Over time, however, she had completely taken over in a way that didn't feel mutually agreed upon. It was as though the actual instructor had been squeezed out without consultation.

"OK, parents, come on up, we need you to help your kids!" she announced.

She handed us each striking arm pads. They look like this:

She went on to show the kids how to do a simple "jab cross," from where to strike to how to hold your fists.

"Here's how we don't punch," she said, and limp-wristedly slapped at the pad with her knuckles. "That's how girls punch." "Don't flip out," I thought. "Maybe she'll self-correct." She did not. In fact she repeated herself. Some of the parents laughed. "We don't punch like girls," she concluded.

I'm not a fiery person. I'm measured. I'm diplomatic. So I took a breath and began to compose my response to Mrs. X in my head.

"That wasn't an appropriate thing to say, especially not in front of impressionable children," I thought. "What kind of message is that sending to all those little boys? Or the three little girls who are daring to step into a male-dominated space? Certainly, as a female practitioner, you know what that feels like? Something I appreciated about the beginning of this class was all the talk of respect, but I'm not seeing you give any. If you can't show some basic respect to women then..."

Then I thought back to the conversations I'd been a part of earlier.

"This isn't a guns problem. This is a respect problem."

When they say "respect" they mean a strict adherence to hierarchy and tradition, and neither hierarchy nor tradition dictate that someone at the top needs to show much respect to anyone below them.

I realized, at that moment, that there were people who were operating off a completely different concept of "respect" than me. When they say "respect" they mean a strict adherence to hierarchy and tradition, and neither hierarchy nor tradition dictate that someone at the top needs to show much respect to anyone below them. To Mrs. X, she wasn't acting disrespectfully when she unceremoniously took over the other teacher's class. She had rank. That, in her mind, was her right. She wasn't acting disrespectfully towards women with her "joke" about girls punching — there was a gender hierarchy and men were at the top.

So when the people saying that school shootings are a "respect" problem, they don't mean it the way I think of respect. They don't mean: "If we all just treat people with dignity this won't happen." (Which, admittedly, sounds nice and carried to an extreme conclusion could work, but isn't especially realistic.) What they really mean is: "We don't have total control over our children's thoughts and behavior and we should. They need to listen and obey. They need to show respect."

It's not that I advocate some sort of Lord of the Flies world where children are permitted to descend into anarchy. But a hierarchy cannot be unquestioningly obeyed if those at the top cannot show that they understand the basic needs and humanity of those below. When tradition and authority don't respect your basic right to equality, life, liberty, and the pursuit of happiness — as a woman, a person of color, a member of the LGBT community, or, say, a child who doesn't want to be murdered at school — unwavering obedience to that hierarchy is misplaced. Sure those at the top are happy, but those below are dying. Violently. That's why I was proud to see thousands upon thousands of those the hierarchy has ignored and failed for too long standing up and demanding to be seen and heard. They demanded respect from people who don't believe they are entitled to it.

Kids are entitled to our respect. And they cannot begin to give you the respect you want if you can't give them the respect they deserve.