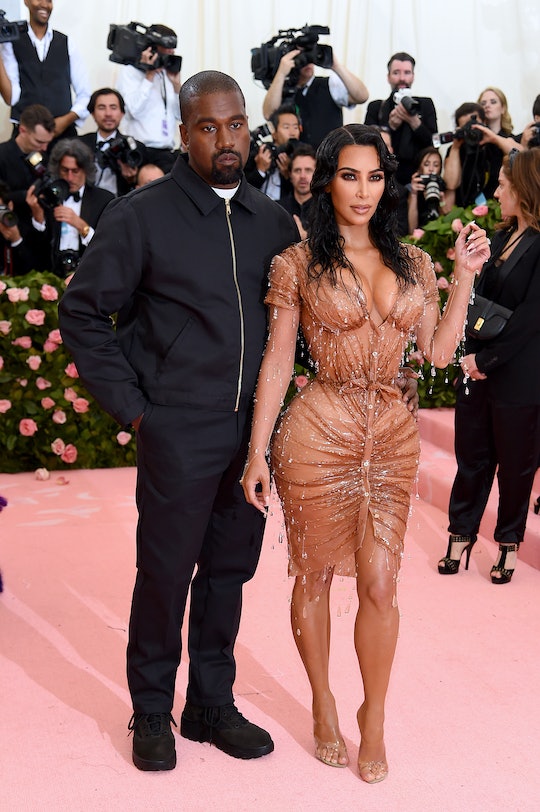 Kim Kardashian & Kanye West Apparently 'Have A Name In Mind' For Baby No. 4

Kim Kardashian and Kanye West welcomed their fourth child, a baby boy, via surrogate on Friday. Since then, fans have been champing at the bit waiting to learn what the couple decided to name their son. Speculation has been rife about what moniker the pair has chosen for the baby, but they've yet to confirm. Kardashian and West apparently already have "a name in mind," you see, it's just that they're in no rush to share it.

The Keeping Up With the Kardashians star and her husband are currently caught up in the chaos of the early days of parenthood, according to PEOPLE. They are introducing their newborn son to his siblings, a source said, noting that "North seems the most excited." As previously reported, Kardashian likes to spend time with her newborns before deciding if a name is a fit. So far, fans haven't gotten a glimpse of the child, but PEOPLE reported that he looks a lot like his famous mother.

"They have had a name in mind, but wanted to meet the baby before they decided," the insider told the magazine. "Kim and Kanye were both present for the hospital birth on Thursday. They are ecstatic. Their little boy is super cute and looks like Kim."

Kardashian appeared to confirm the resemblance on Twitter on Friday. She tweeted that the newest addition to the Kardashian-West family is "Chicago's twin lol I'm sure he will change a lot but now he looks just like her." Kardashian previously said that Chicago looks "just like her," during Ashley Graham's podcast, Pretty Big Deal. Kardashian said during the podcast episode that she was worried about connecting with the baby because she was born via surrogate, and thinks God intervened.

"I think I was so nervous to have a surrogate and to have that connection that God was like, 'I'm going to make her look just like you'," she said.

Kardashian has been public about considering Robert as a potential name for the child. During a recent episode of Keeping Up With the Kardashians, which recapped a family trip to Bali, Kardashian was told by a medium her son would be a reincarnation of her father, Robert Kardashian. In the episode, as Buzzfeed noted, she considered naming her son after her father, but was on the fence about it.

She also talked about the name on Jimmy Kimmel Live! admitting that she was toying with the idea, but felt it was too normal a name compared to her other children's. She noted during the episode that she wasn't just considering Robert for her father, but also her brother. Kardashian was adamant at the time that it was only an option.

"I was truthfully thinking about just naming him 'Rob,' after my brother. But then it's North, Saint, Chicago, Rob. It doesn't really go. But I was really feeling that and my brother approved it, so that's our one kind of name," she said.

Kardashian has been quiet since her initial tweets about the baby's arrival. She hasn't teased the name on social media, or shared any sneak glimpses at her baby. Fans may just have to keep waiting it out until she and West finally announce their decision.