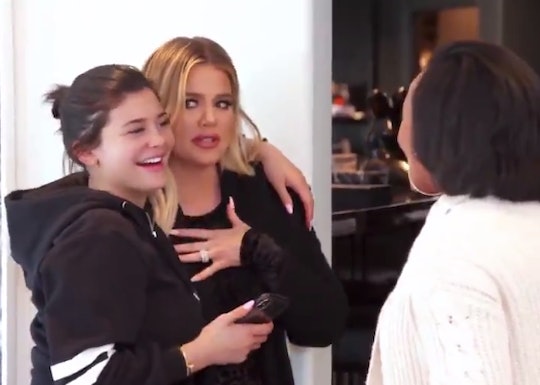 Kim Kardashian's Surrogate *Might* Be Revealed On The 'KUWTK' Finale

Well, well, well. Although we all assumed Kylie Jenner was missing for the better half of 2017 because of her pregnancy, she was actually around her family and filming for Keeping Up With The Kardashians, as a clip from the finale reveals. But a sneak peek of a very pregnant Kylie isn't the only thing fans have to look forward to. Some fans think that Kim Kardashian's surrogate could be revealed on the KUWTK finale, too. When it comes to the Kardashian and Jenner family, patience is always a virtue.

Now, we have absolutely no confirmation about whether that's Kim's surrogate or not. But, as Cosmopolitan reported, on the Instagram account @kyliesnapchat, the clip from the finale was shared with the caption, "YES we will finally see Kylie pregnant on Sunday’s season finale!! Also Kim’s surrogate (on the right) will be revealed!"

Kim and husband Kanye West took every precaution possible when it came to protecting the identity of their surrogate for her own privacy, but also for security, most likely. After Kim's robbery in Paris, there's no telling what people will do. Despite their secrecy, some entertainment tabloids dug into it and reported her name and she does look like the woman in the video clip from the finale. We don't really see her face, but you can see that there could, theoretically, be a resemblance.

TMZ reported late last year that Kim and Kanye were close to their surrogate, who is already a mother of her own two kids. Sources close to the family told the outlet that the woman was being paid $45,000 over 10 months and was following really strict guidelines, like not eating raw fish or consuming caffeine while she was pregnant. The source said:

They want everything to be perfect and for the baby to be extremely healthy. They don’t want any complications and Kim is providing an ideal eating regimen and diet so everyone knows what the baby is consuming before it's born.

Of course, there were tons of rumors about Kim's relationship with her surrogate, but judging from this clip, it looks like she was welcomed into the Kardashians' home and family. In the clip of the finale, Kylie and Khloé Kardashian seem to be meeting the woman for the first time and they tell her that they are three months apart in their respective pregnancies. The woman asks "how excited" they are and both Kylie and her big sister seem to still be in shock, really. Khloé adds, "we've both never been through this before" with a pretty scared look on her face.

The clip was likely filmed in the fall — just when we were all wondering where the heck Kylie and Khloé were — since they don't look super far along in the clip. It's not clear what event they're at when they meet the surrogate. It's definitely not a baby shower or a party because both Kylie and Khloé are makeup-free and have their hair in messy buns. That's not how these women do baby showers and birthday parties.

It looks like Kimye and the surrogate will be spending more time with each other. According to documents obtained by Radar Online, their surrogacy contract stipulates that the family and the surrogate meet for at least two hours after the birth of the baby and keep in touch with the surrogate on special occasions, as long as everyone is open to it, which is reportedly standard. Judging from how easily Kylie and Khloé talk to her in this clip from the finale, it looks like she's already one of the family.