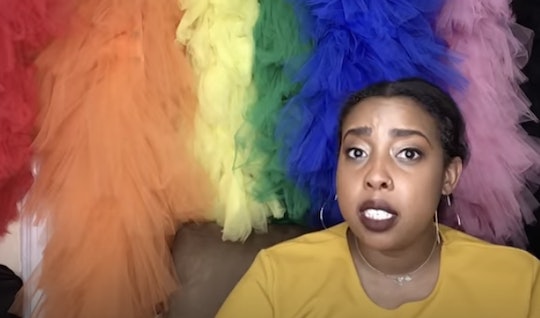 Talking to kids about racism can be tricky, but it's necessary to do so. Thankfully, there are plenty of resources out there to help parents, such as this wonderful kindergarten teacher's video explaining racism to her young students in a gentle, yet profound way.

Very Ahiyya is a kindergarten teacher from Brooklyn, New York, and like so many other educators across the country, she's been teaching her students via Zoom during coronavirus school closures. And last week, amid ongoing protests denouncing a long history of systemic racism and police brutality happening across the country following the police-involved killings of George Floyd and Breonna Taylor, Ahiyya sat down to read a children's book she felt was especially important right now: Let's Talk About Race by Julius Lester.

"I wanted to talk to you today about all of the things that are going on right now. You may have noticed or heard your family talk about what's happening in the news, beyond just the COVID virus, which is spreading," Ahiyya begins her video, which has over 97,000 views on YouTube. "We are also combatting a different kind of disease." That disease, of course, is racism.

Ahiyya explains to her students that racism is "something that happens with the way that people think and some people have the belief that people with black or brown skin should not have the same rights or privileges as people with white skin."

With regard to the Black Lives Matter protests kids have likely seen on the news and heard their parents talk about, Ahiyya goes on to explain that right now "a lot of people are making the choice to say, 'That's wrong. Racism is wrong.'"

Before beginning to read Let's Talk About Race, Ahiyya gently guides her students to find the power of using their own voices and reminds them that if they are "even as little as 3 years old, you have a voice." "You know what's right," she says. "And you know what's wrong. And you can use your voice.'"

The kindergarten teacher wrote on Instagram that she decided to make this important video for her students and share it with others because she realized it could be a helpful resource for non-Black children to learn more about "what racism is and how it’s impacted the lives of Black and Brown people." Ahiyya also encouraged "young people to think about what actions they can take to use their voice to speak out against injustices."

More Like This
7 Questions To Ask Your Child's Kindergarten Teacher
Can We Fix The One Big Problem With The PTA?
How To Get Free & Inexpensive Back-To-School Supplies
These 21 Educational Board Games Are Perfect For Homeschoolers