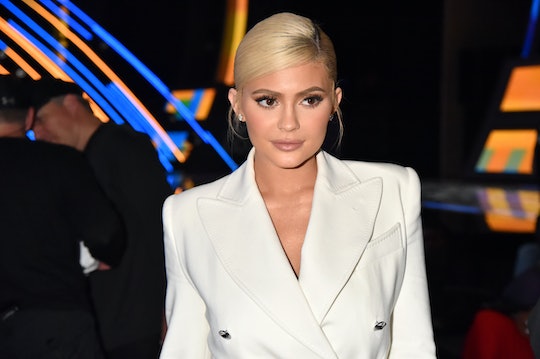 As her daughter's second birthday approaches, Kylie Jenner seems to be reminiscing about her pregnancy with Stormi. It feels like it was just yesterday that the makeup mogul fell off everyone's radar while she was preparing to become a mom. And on Tuesday, Jenner decided to share a glimpse of that time she kept out of the public eye with her millions of followers on Instagram.

On Jan. 7, Jenner shared a stunning throwback photo of her holding her bare bump on Instagram. "Throwback pregnant with my baby girl," she captioned the photo of her standing outside. "I can't believe my daughter will be two soon..."

Little Stormi was born on Feb. 1, 2018, so her special day is right around the corner. Since Stormi made her very grand debut nearly two years ago, her mom has blessed her followers with the cutest photos of her little one, but a just few photos from when she was pregnant, making her throwback photo a real treat for fans.

At this time in 2018, Jenner was still pregnant and had been keeping her pregnancy a secret from outsiders until Stormi, whom she shares with ex Travis Scott, was actually born, though there was plenty of speculation, of course. Still, Jenner chose to keep her pregnancy and birth to herself for a least a little while. As she said in a September 2018 interview with Vogue Australia, "I just felt like it was a sacred special moment and I wasn't ready to share it with everybody. I just wanted to keep it to myself."

Needless to say, many people were thrilled to see this throwback photo. For example, Jenner's sisters, Khloé and Kim Kardashian replied to the photo with heart emojis.

While Jenner certainly has her hands full with her business, her daughter, and planning Stormi's second birthday party, she has previously opened up about wanting more children in the future. For example, during a Q&A on her Instagram Story in October, according to screenshots captured by Bustle, Jenner said "I can't wait to have more babies, but not ready just yet."

Who knows, maybe whenever Jenner is pregnant again, she'll decide to bring her fans along for the journey. Or she could go incognito again, that would be pretty wild, too.