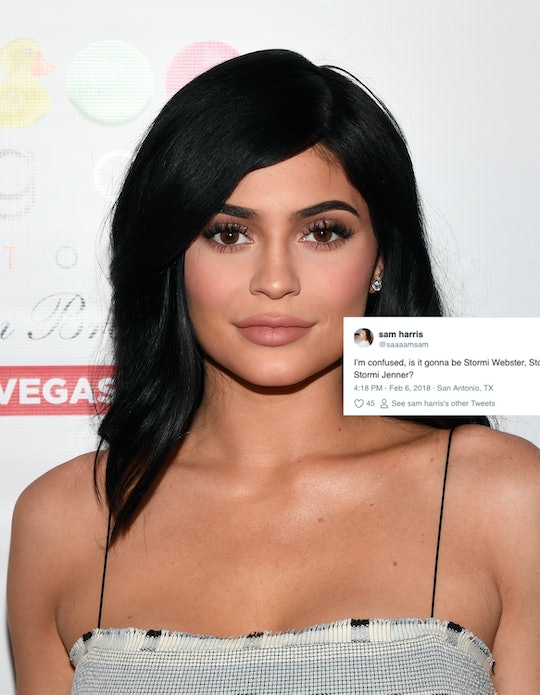 On Tuesday, new mom Kylie Jenner finally shared her infant daughter's first name with the world in a sweet Instagram post, and confirmed that the baby is actually named Stormi, not Butterfly or Mariposa, as many fans predicted on social media. But in a later update to her original post, Kylie Jenner revealed Stormi's last name, and it also caught some fans off-guard.

After Jenner's Instagram post went live, many began to wonder whether Stormi would be given her mother's famous last name, or whether she'd be named after her father, Travis Scott. It turns out that the couple went with the latter option — although her name isn't Stormi Scott. Jenner and Scott actually named their little girl Stormi Webster, according to People, which, as it turns out, is Scott's legal last name. Though he goes by the stage name Travis Scott — a name inspired by a beloved uncle — the 25-year-old rapper's real name is Jacques Webster, and now, little Stormi is a Webster, too. The choice of name makes sense, of course, but that naturally hasn't kept Twitter from having lots of opinions about it. And, well, let's just say that in true Kardashian-Jenner style, it seems like it might take a little bit of time for people to wrap their heads around Jenner's baby name pick.

Though some were expecting a flashier name reveal, Jenner opted out of taking the internet's advice to announce her daughter's name on a lip kit, and instead stuck with a low-key Instagram post in which she shared a gorgeous photo of her newborn holding onto her (perfectly manicured) finger while she appeared to be asleep. It was the latest in what has been a series of beautiful baby updates from the 20-year-old beauty mogul, who confirmed months-long rumors about her pregnancy after her daughter had already arrived by sharing a statement on her social media accounts on Sunday.

Along with the announcement, she also shared an 11-minute video on YouTube that recapped her very-private pregnancy in a montage of home video footage — and while normally that might seem like over-sharing, in Jenner's case, it pretty much felt like the exact opposite. While the world had spent most of her pregnancy trying to catch a glimpse of her rumored baby bump, analyzing photos endlessly, and assuming her silence was part of an elaborate publicity stunt, the video showed that, actually, Jenner had a lovely, normal pregnancy, and she just wanted to enjoy the lead-up to motherhood without having to deal with the pressure of the public glare.

But unless Jenner had planned on spending her life as a mom in off-the-grid seclusion, she was inevitably going to return to the spotlight. And now that she has, well, Twitter has a lot to say about it. Although most of us are still adjusting to the idea that she actually named her daughter Stormi ("No, Starbucks barista, that's 'Stormi' with an 'i'"), the fact that her full name is Stormi Webster honestly seems to have thrown people off even further.

Some, for example, were just straight-up confused:

While others were disappointed to learn that the little girl had missed out on the otherwise pretty badass double-S name, Stormi Scott:

Some fans weren't happy to learn their carefully thought out name predictions were completely wrong:

While some thought Kylie's baby name choice made big sis Kim's unusual picks seem so much better in comparison:

And, well, some people were just not even sort of here for any of it:

But let's be honest: did anyone actually expect Jenner to give her child a regular, predictable name? Not only does she come from a family that put the name North West on the map, she is also one of six siblings with names all beginning with "K" (and some rather creatively, ahem, Khloé and Kourtney). And while it does seem a little anticlimactic to learn that Scott's last name is actually Webster, it's not at all unusual that he has a stage name (and therefore that the couple would actually want to give Stormi her father's legal last name). In other words, as much as Stormi Webster might appear to make no sense whatsoever, well, it actually really does.

Of course, that doesn't necessarily mean that the internet is going to agree with the couple's decision — in fact, it would have been pretty surprising if it did. But hey, that's the way it goes with celebrity baby names. Especially when you're a Kardashian or a Jenner.