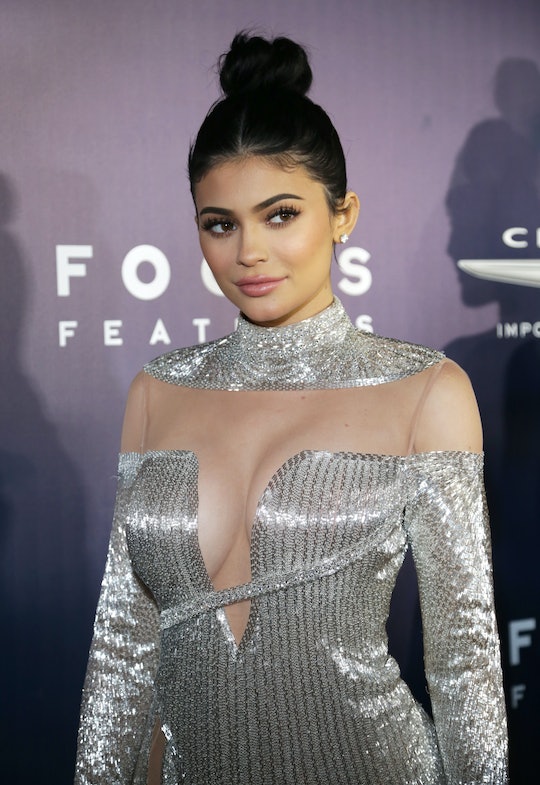 After keeping her entire pregnancy hidden from the public, Kylie Jenner is finally opening up about the details of the experience. Sunday night, Jenner engaged in an impromptu Q&A session with fans on Twitter, responding to questions and musings regarding all things Stormi Webster. Kylie Jenner shared why she wasn't afraid to give birth, how different family members responded to the news of her pregnancy, which sister she told first, how boyfriend Travis Scott is doing with Stormi, and more.

Jenner only revealed the pregnancy several days after she gave birth to Stormi, despite the endless rumors. Her announcement came just over a month ago, so it makes sense that she's slowly been opening up to fans — but the fact that she chose to hold the Q&A Sunday makes a lot of sense, considering the weekend's festivities. Earlier in the weekend, Jenner and the rest of the KarJenner sisters gathered to celebrate sister Khloé Kardashian's pregnancy at an elaborate baby shower, according to photos Khloé flooded Instagram with. Perhaps the party had Jenner feeling nostalgic about her own pregnancy, prompting her to share a few tidbits on Twitter.

"Were you afraid of giving birth? I'm just a year older than you and this is my number 1 fear about having a baby," a fan tweeted to Jenner Sunday night. "I wasn’t afraid! & you shouldn’t be either. We were made for this 💪🏽," Jenner responded.

Being afraid to give birth is a totally normal feeling, and while every woman has their own unique feelings about the experience, Jenner's reminder that some people's bodies are built for giving birth could definitely be reassuring for some expectant parents. In fact, many responded agreeing with Jenner.

However, others did not like Jenner's statement, explaining that women are made for so much more than childbirth.

It's safe to say that Jenner did not mean to suggest that women are solely meant to have babies. Jenner is a successful, self-made businesswoman, and she identifies as a feminist, according to the Huffington Post. Jenner's statement that cis-women (or women who were assigned female at birth and identify with that sex and its corresponding gender) were made to give birth more realistically implies that it is simply natural for cis-women to give birth.

Something that likely helped with Jenner's calm outlook on childbirth was the support of her family members, many of whom have given birth and undoubtedly gave her advice. For example, Jenner says her mom Kris was "sooo supportive."

When you have as many sisters as Kylie Jenner, it's understandable to mix them up sometimes. When someone asked her which sister she told about her pregnancy first, Jenner said it was either Khloé or Kourtney. Oops.

Jenner and Scott have not shared too much about their relationship, but Jenner reported that he is doing well as a father.

When Khloé found out she was expecting a girl and not a boy, she made headlines for being honest about her initial disappointment. As it turns out, Jenner was also sure she was having a boy when she found out Stormi was a girl.

A fan asked (rather, told) Jenner that she wanted to see her maternity photos, and the reality star gave a promising answer. "I have tons! Maybe I’ll share one day ☺️," she responded.

And, luckily for her, Stormi was born with a built-in bestie in her cousin Chicago — and the two babies are already bonding. "Are Stormi and Chicago besties already?!" a fan asked. "Yes," Jenner replied.

When Jenner announced Stormi's birth, she expressed how much she enjoyed keeping her pregnancy private. That being said, it's clear that her fans are feeling pretty happy that Jenner's social media detox is finally over.