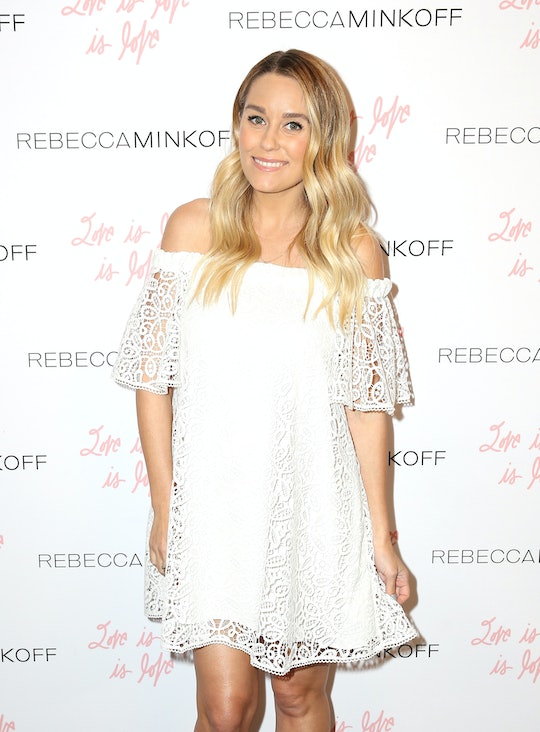 Leave it to the ever-stylish Lauren Conrad to pull off a perfect mic-drop on Halloween. I'm not going to be one of those bitter women who puts down other women for being great at everything, so I'll just put a pin in it and try to be a grown-up. A grown-up who struggles every year to come up with a perfect Halloween costume (which is tough enough without adding a baby into the mix). So you might understand my envy when Lauren Conrad and her son Liam wore the best retro-inspired Halloween costumes ever.

Somehow the former star of The Hills managed to pull off two costumes that look great and have that perfect little wink-wink element that is so important for a great Halloween look. As People reported, she shared a few pictures on Instagram of herself and her 1-year-old son Liam (whom she shares with husband William Tell), dressed up in their goods ahead of Halloween. One element of her matching costume set that I love is that it's from a horror movie, yet isn't instantly recognizable like some others you see every year (your Michael Myers from Halloween, your Carrie from Carrie, and so on).

This look took me a few seconds to figure out. Which makes it even better.

Conrad is wearing a retro-inspired skirt suit and has birds in her hair, while Liam (who doesn't look even remotely frightened by his mother's threatening stance, I feel I should point out) is wearing what looks to be a blackbird costume. As she noted in her caption:

I hope this little blackbird grows to 🖤 this holiday as much as I do!

In other words, this is Conrad's homage to Alfred Hitchcock's 1963 classic horror movie The Birds. And if you've ever seen the movie, you know it's pretty much perfect. Even down to Conrad's mussed up hair and what look to be little bird scratches on her cheeks. As someone with a deathly fear of birds I can tell you, this is my nightmare. But Conrad pulls it off beautifully.

Now if you're thinking the designer just picked up a Halloween costume at Target, think again. This was a DIY project and she shares tips on how to recreate the look on her website. This isn't the first time Conrad has knocked it out of the park with her choice in Halloween attire. Last year she shared a picture of herself dressed as the all-time greatest movie villainess, Cruelle De Vil from 101 Dalmatians, and one can only assume that somewhere out there is a picture of her son Liam, still just a wee baby at the time, dressed as a dalmatian puppy.

It can be tough to come up with cute matching Halloween costumes with your kids. There's so much that needs to be considered; it has to be comfortable for your little one, sort of spooky and unique and interesting.

No big surprise that Lauren Conrad came up with a keeper. And now I'm over my jealousy, I swear.