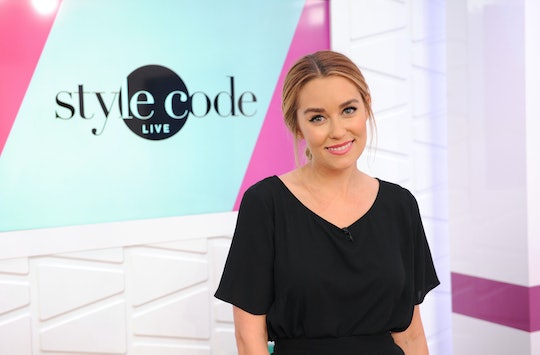 These Lauren Conrad Quotes About Motherhood Are So Relatable

Last month, Lauren Conrad and husband William Tell welcomed their first child into the world. And on Wednesday, the reality TV star turned fashion designer shared the first adorable pics of Liam James Tell with the world in a People magazine exclusive. Now that we've all experienced the cuteness that is their growing family, it's time for some LC wisdom. And Lauren Conrad's quotes about being a new mom are brimming with insight and her own excitement about starting her family — and, best of all, they're all so, so relatable.

Conrad and Tell first met little Liam officially July 5, after announcing the news of the pregnancy on New Years Day with an Instagram photo of an ultrasound. Since then, Conrad revealed that she had been secretly hoping for a boy — and so of course she's over the moon now that he's finally here. And from her one-of-a-kind birth announcement to getting real about her post-pregnancy body to recalling all her whacky pregnancy cravings, the former It girl of MTV's The Hills and Laguna Beach has a lot to say about what it's like to be a mom.

So, here are some of the highlights of LC's life with a baby so far.

On Preparing For Delivery

Here's a feeling many moms can relate to: Conrad just wasn't sure what to expect before she officially met her son. "Before the delivery, I felt like I was getting ready for a blind date," she said, according to People.

Judging by that absolutely beautiful photo of Liam, I think it's safe to say that his mom was ultimately pleased with what she saw.

When she gave birth July 5, Conrad — who has a fashion line and bills herself as a lifestyle guru — had to think about her professional endeavors, too. Here's what she wrote on her website about her temporary absence, even referencing her two dogs as part of her family:

I’ll be taking a little bit of a step back from the site over the next few weeks as we adjust to life as a family of three (five, if you count Chloe and Fitz of course…). But not to worry… my editorial team will be working hard to bring you tons of great content in the meantime, and I’ll still be blogging here and there when I can, bringing you updates from my life as a new mom.

Conrad noted that she has "drafted up a few blog posts ahead of time," so her fans could still get their LC fix while she took her well-earned maternity leave.

On Rockin' Her Post-Baby Body

As she told People in the interview, Conrad is in no hurry to shed that 25 pounds of baby weight she put on throughout her pregnancy. And taking that pressure off herself is something every woman can cheer for. Here's what she had to say about it, according to People:

I just made a person. It's fine. And there are always things you can do to make yourself feel better. ... I'm trying to focus on things that are positive — like, I've never had boobs before, so I'm going to try those on for a little bit. I'm trying on a new shape.

On Life With Baby

Well, moms with babies who cry through the night may not be able to relate to Conrad's experience so far on that front. For her, nighttimes with an infant have been going pretty much as smoothly as possible, she told People:

I feel so spoiled. Liam is such a good baby. I'm sleeping three to four hours at a time. This morning I was up at 4 a.m. and I wasn't even tired, so I cleaned the kitchen and did some cooking. William was like, "You're crazy!"

On Looking Forward To The Future

As much as Conrad is loving being the mother of a healthy, happy baby boy, she looking forward to when he's a little older and can do some fun activities:

I'm just excited to play again! I can't wait to break out the finger paints. And I'm such a Disney nerd, so I get to watch those movies with someone who is seeing them for the first time.

And as Liam grows up, Conrad will surely have even more to say about the different stages of motherhood.