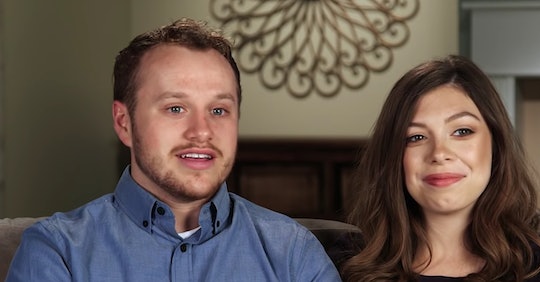 If there's one word to describe Lauren and Josiah Duggar's 1-month-old daughter Bella, that'd have to be cheerful. If you weren't convinced, just look to a new photo of Lauren Duggar's baby girl smiling in her grandma's arms with her grandpa nearby.

Although viewers of TLC's Counting On, may know Michelle and Jim Bob Duggar simply by their names, their grandkids know them by two fun nicknames — "Lolli" and "Pops." And in a new Instagram post shared over the weekend, Lauren referred to her in-laws by those cute names, alongside a new photo of her daughter Bella smiling wide with her Duggar grandparents.

"I am so grateful for these amazing people right here!" Lauren captioned the post. "So grateful for their godly example they set for their children and their grandchildren. As you can tell by Bella's smile, we love them so much!"

Lauren also added a little note for people might've made comments about her daughter not wearing a jacket, while her grandparents were . bundled in coats. "So for those wondering why Lolli and Pops have their coats on and Bella doesn't...they just walked inside from being out in the weather."

It's hard to say what would've appeared in the comments section of Lauren and Josiah's new photo if she hadn't beat potential critics to the punch, but most just couldn't get enough of the cute pic of Bella with Lolli and Pops. Lauren's sister-in-law, Jessa Duggar, commented on the photo, "They're the best!" And a follower wrote, "Your baby is just so beautiful! You all are blessed to have Michelle and Jim Bob as grandparents."

Michelle Duggar clearly loves being a grandma, or Lolli, to her grandkids, a group she hopes will grow quite a bit in the future. During a recent episode of Counting On, Michelle predicted that she would be getting more grandkids in the future, and sounded thrilled the possibility. "It's a good start, but the more children that are married, I wouldn't be surprised if there could be like, 12 grandbabies in one year," she said. "This is only just the beginning."

As of 2019, Michelle and Jim Bob have 16 grandkids (with one more on the way in early 2020), and while they surely have sweet bonds with all of them, Lolli and Pops clearly seem to have a special connection with Josiah and Lauren's little girl.