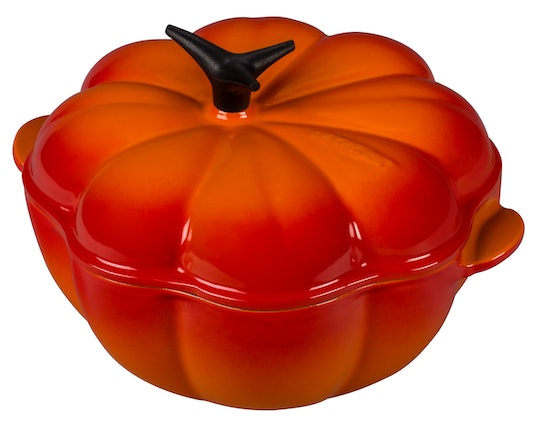 Le Creuset's Pumpkin Collection Is What Your Kitchen Needs This Fall

If I’ve learned anything from my love affair with The Food Network (Hi, Ree Drummond!), it’s that what you cook and serve your food in should be as delicious as the dish itself. That's why you should be very excited about Le Creuset's pumpkin line, featuring Dutch ovens and cocottes shaped like everyone's favorite decorative gourd, just in time for soup and sweater weather.

If a Dutch oven hasn’t already become a part of your cooking repertoire, now’s the time. The 5 ½ qt. Le Creuset Round Dutch Oven ($350, Le Creuset) is fantastic for the fall and winter seasons. The cast iron cookware can be used as a traditional slow cooking method, (think slow simmering soups and stews), or to braise a pot roast, a brisket, or even veggies. And of course, you can always roast a turkey in it as you start thinking about your Thanksgiving menu. And guys, it comes in the color Persimmon, which means it will match perfectly with any holiday-themed tablescape.

As far as pots and pans go, Le Creuset Dutch ovens are pretty low maintenance. You don’t have to season them, and they can go directly from the stovetop to the oven. They’re also super versatile; most of them electric and gas stove, as well as an oven — even an outdoor grill. (Just read the directions first to keep your cookware safe.) They can even go into the dishwasher, which means less for you to hand wash after your meal.

And if you can’t get enough pumpkins in your life right now, Le Creuset's Pumpkin Cocotte ($150, Le Creuset) is just precious. (Cocotte is the French word for Dutch oven, by the way, as per InStyle.) The 2 ¼ qt. cast iron Dutch oven comes in the color Flame (aww), and boasts an inner enamel interior that will help you caramelize food (like onions for a French onion soup), without burning or sticking. It’s even safe in the oven up to 500F. The Petite Pumpkin Cocotte ($30, Le Creuset) can be used for single servings of soup (like when you don’t want to share your Roasted Butternut Squash Soup with your sweetie) or as a cute little candy container.

Speaking of which, if you want something seasonal to serve your fun size Snickers in, look no further than the Le Creuset Pumpkin Dish ($25, Le Creuset). It features the pumpkin veining on the inside and also showcases the Le Creuset logo. A petite version ($15) measures five inches and would be awesome for autumn. If you don’t want to have a bowl of candy out on display (because, well, kids), you can always use the dish for other things, like as a potpurri container, or even as a cute little key holder.

Made in France, Le Creuset is well-known for its superior craftsmanship. Which might explain why each and every piece is still hand-inspected by one of 15 artisans employees, according to the company’s website. And while some pieces (like the Dutch ovens) can be pricey, the fact that you can use them year-round means that you’re making a solid investment in your cookware. Plus, if you consider that you’re cooking (and serving) your meals in the same pretty pots, it ultimately means less pans that you’ll have to purchase in the long run. That’s certainly something to think about as you sip your PSL and wrap yourself up in a warm blanket.