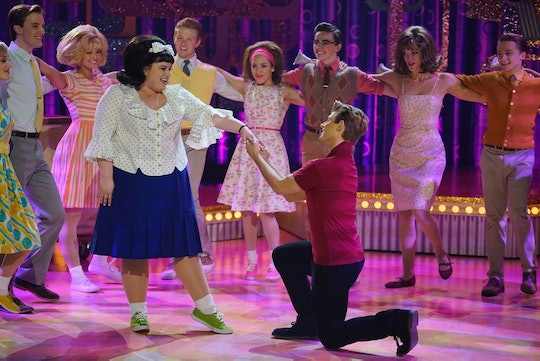 Link’s Line About Consent In ‘Hairspray Live!’ Missed The Mark

Watching actors perform several numbers each scene and singing along to the upbeat music of Hairspray Live! is all well and good, but for some of the songs, if you stop and listen to the lyrics — and the lines that come before and after the songs to help set up their purpose — they can be kind of unsettling. Take, for instance, Link's line about consent in Hairspray Live!, when Tracy was knocked out during gym class and Link told her, "You're beautiful when you're unconscious." It was a quick comment that could've been just as quickly overlooked, but fans took notice.

There are plenty of sexual undertones during performances and within lyrics to different songs on Hairspray Live!, like when Seaweed tells Penny that her jaw must be "strong" from all of that gum chewing, or something like that. But lines like that, along with Link's line about Tracy being beautiful when she's unconscious, probably aren't given as much attention as they should in the production of the show, the lines, and the characters.

In a world where date rape on college campuses is so widespread that it warrants a documentary (The Hunting Ground) and Bill Cosby date rape drug allegations, a "joke" about a woman looking beautiful when she's unconscious really has no place in a feel-good musical. It was a quick line, tossed out there right before Tracy woke up, and then never spoken of again, but that's also part of the problem. Lines like that aren't supposed to be taken as lightly as they apparently were on Hairspray Live! and whoever decided to include the line about consent really didn't get the memo.

The line is also from the Broadway musical version of Hairspray and it was just as creepy when said on stage in that production. But apparently it wasn't off-hand enough to leave out this time around. Some fans can't help but compare Garrett Clayton's Link to Zac Efron's from the 2007 movie, so delivering a line like that doesn't really help garner any love for the new Link, but it doesn't serve any purpose regardless.

From the beginning, Link's attraction to Tracy is kind of dysfunctional, since he really only gravitates toward her when she becomes the next rising star of the Corny Collins Show. So when the line comes as a way for Link to give Tracey a "compliment" for the first time, it's seen as a turning point in his attraction to Tracy, but really it's a not-so-funny "joke" thrown in there. The musical would've been better served without it. Even if it was intended to be harmless, normalizing this type of conversation is dangerous for everyone involved.