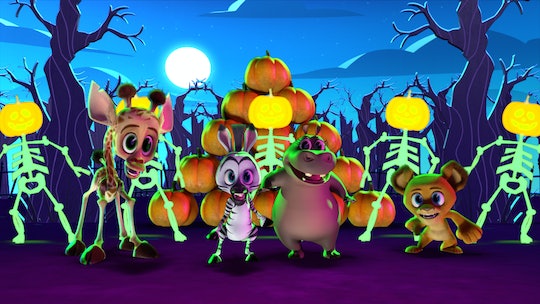 Halloween is going to be a bit strange this year, we all know it. But don't worry, there's still plenty of at-home fun to be had with the brand new Madagascar: A Little Wild's Halloween special coming to Hulu. If you and your kids have been wondering what it would be like to see Gloria the Hippo, Alex the Lion, Marty the Zebra, and Melman the Giraffe try their hand at a costume party, you're in for a real treat.

DreamWorks Animation's new animated series Madagascar: A Little Wild, which premiered on Hulu and Peacock in early September, features the same zoo animals from the original Madagascar films, along with a few new characters like monkeys who speak American Sign Language. But this time around, they're adorable baby animals.

In Madagascar: A Little Wild's A Fang-Tastic Halloween, a Hulu original premiering on Oct. 21, fans will get to meet another a new addition to the Central Park Zoo — a bat — and there are apparently some spooky rumors going around about this newcomer. Marty hears the rumors and starts to worry about how he will protect his pals from the mysterious bat. But when that bat helps him out of a tough situation, Marty changes his tune and decides not to judge anyone based on false stereotypes.

In the trailer for Madagascar: A Little Wild's A Fang-Tastic Halloween, exclusively shared with Romper ahead of the family-friendly special's premiere next month, you can see how the gang gets into the Halloween spirit with some trick-or-treating, costume contests, and Jack-o-Lanterns aplenty. And, of course, how they first react to meeting their new bat buddy.

Madagascar: A Little Wild's A Fang-Tastic Halloween is just one of many original programs Hulu has to offer as part of its Huluween programming in October. There are several options for adults to watch after the kids head to bed like the first season of Monsterland on Oct. 2 and the new horror comedy Bad Hair, which will premiere on Oct. 23.

But if you and your kids want to see Alex, Gloria, Melman, and Marty dancing around as glow-in-the-dark skeletons as cute baby animals, be sure to mark your calendars for Oct. 21.