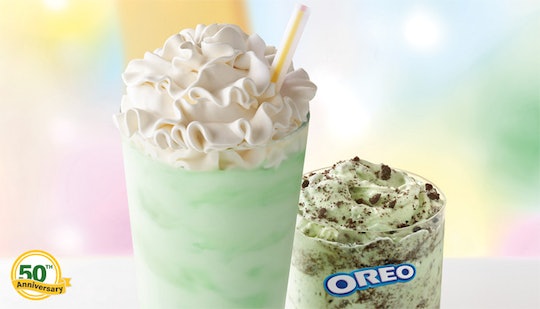 Shamrock Shakes Are Back & Now Oreos Are Involved

Get ready to thank your lucky stars: On February 19, McDonald’s Shamrock Shake is coming back. And as if that weren't enough, in honor of the minty treat's 50th anniversary, they're also unveiling an additional Oreo Shamrock McFlurry. That's right, this year you can go green a whole month before St. Patrick’s Day with two holiday sweets (available for a limited time across the nation).

If you didn't know the popular Shamrock Shake was half a decade old, you're not alone. While the seasonal menu item was originally released to coincide with St. Patrick's Day in 1970, according to Food & Wine, it wasn’t until 2012 that it got a nationwide release. The green vanilla soft-serve blended with Shamrock Shake syrup has had a handful of spin-offs over the years, including a 1980 Shamrock Sundae and a Chocolate Shamrock Shake in 2017. So naturally the fast food company has rolled out an accompanying cookies and cream sidekick, the Oreo Shamrock McFlurry, to celebrate its 50th birthday. And since it wouldn't be right to merely celebrate the seasonal slurp-er just in the U.S., Canadians (and, naturally, McDonald’s-goers in Ireland) can indulge as well.

Another fun fact? The most hardcore Shamrock Shake fans might remember a special McDonald’s character created to promote the drink. No, you’re having a Shamrock Shake-induced fever dream. That was real. Uncle O’Grimacy, according to Fandom, was Grimace's Irish uncle, created for a McDonald's commercial promoting the green drink.

We're not sure what happened to old Uncle O'Grimacy, but he hasn't been heard from in years. That said, even without the creepy lilt of a giant green mascot, the Shamrock Shake has continued to make a mint off of super fans with more than 60 million sold since its debut, according to Fox News. And with this latest release, it doesn't look like the cult classic has lost any of its appeal.

Using the hashtag #shamrockshake, Twitter fans are already losing their minds over the roll out.

“The Shamrock Shake is coming out on February 19. See? There is still goodness and light in this world,” wrote another.

Find that goodness and light in the form of a frozen pot-o-soft-serve at the end of McDonald's rainbow beginning February 19.