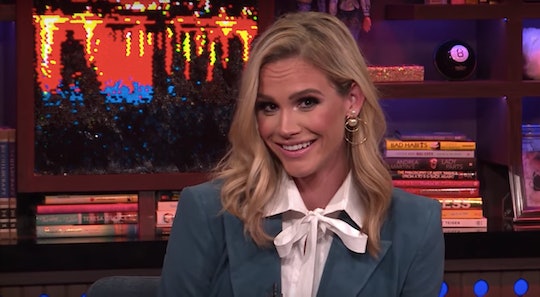 Naming children is not a simple task, and it's especially tough when you have twins. You want to get it just right. Then again, sometimes a parent just knows what a kid should be named before it even arrives. For example, Meghan King Edmonds revealed her twins' names, along with the inspiration behind them, and it's a super cute story. A lot of thought went into those names.

The Real Housewives of Orange County alum welcomed her sons earlier this month and named them Hayes and Hart. According to a blog post she wrote on her website, the 33-year-old and her husband Jim were deciding between a couple of name options before they were born— Hart, Hayes, Haze, and Lake. But things got all mixed up for a little bit. Meghan wrote, "Inside of me Baby A [who was born first] was active and I thought Hart was a good name for an active baby and Hayes or Lake would be better for my Baby B, my chill baby."

"But on the outside, Baby B is active and Baby A is chill! Three days later after much thinking we name Baby A Hayes and Baby B Hart," the reality star added. When it comes to kids — and especially twins — having a back up plan is always recommended, right?

There's also a lot of history behind the names. Meghan, who also has a daughter named Aspen, wrote that they're both family names. She added, "Hayes (who looks like Jimmy) is Jimmy’s great-grandma’s maiden name, Hart (who looks like me) is my great-great-great grandpa’s first name. King is a given for their middle names. Our family is now completely complete."

So if you're wondering whether she and Jim are planning on more children, it sounds like they're just fine with their little brood at the moment. Completely complete is not a bad place to be. Meghan's entire birth story is written out on her blog if you want all the details about her labor experience, which also helped the couple pick a name. It turns out that during her first contraction, her stepson called Jimmy to check in. He approved the names, she wrote:

My stepson, Landon, called at the same moment to FaceTime my husband and heard my first big contraction. He also told my husband he likes the name Hayes which we had decided against. Jimmy hangs up the phone and tells me Landon wants to name a baby “Hayes” and so Jimmy now wants to as well.

Things really can never go as planned when it comes to kids, right? She added in her birth story that she was happy to let her twins take their time growing, but that at 37 weeks pregnant, she and her doctor decided that induction was the best way to go. Meghan wrote that she felt "awful" inducing her sons before they were ready but given the risks, she decided it was best not to wait. Meghan did it all without medicine, too, which is something that she's particularly proud of. The RHOC star said:

Overall I had a beautiful labor almost exactly as I envisioned. I am so blessed to have had a natural, vaginal labor. I was incredibly conscious of everything happening to my body, I knew what to expect during each stage, I felt present, awake, and enlightened. It was incredibly painful but I enjoyed my breaks between contractions. I feel so powerful.

It wasn't all a breeze, obviously. Meghan told People in May that this pregnancy was a little more difficult than her previous one. She said at the time:

I'’m getting miserable. I feel like the babies are like, in my ears. And most definitely in my lungs. I am really struggling with breathing. You can really tell in my Instagram Stories. I’ll listen to them back and I’m breathing so heavily just doing nothing. Plus, I can’t feel my legs. And bending over is, like, a thing in the past.

So although the experience was rewarding at the end, Hayes and Hart really gave her all the trouble they could. Hopefully now that they've arrived she can take some time to enjoy her new family and chill. And you know, practice bending over again.