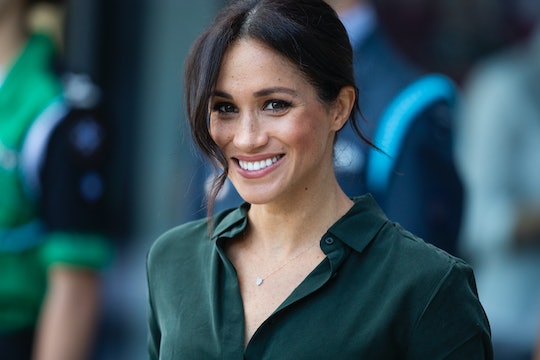 After what felt like an eternity of waiting and oh so many gorgeous maternity outfits later, the day has finally arrived. News broke today that Meghan Markle is in labor with the royal baby and that means the world will get to meet Baby Sussex very, very soon. But that won't happen today, so don't hold your breath for too long.

UPDATE: Soon after palace officials announced Markle was in labor, the Duke and Duchess of Sussex announced on Instagram that they'd welcomed their first child.

"We are pleased to announce that Their Royal Highnesses The Duke and Duchess of Sussex welcomed their firstborn child in the early morning on May 6th, 2019," the announcement on Instagram read. "Their Royal Highnesses’ son weighs 7lbs. 3oz. The Duchess and baby are both healthy and well, and the couple thank members of the public for their shared excitement and support during this very special time in their lives. More details will be shared in the forthcoming days."

EARLIER: "Buckingham Palace has confirmed that the Duchess of Sussex is in labour," Richard Palmer from The Daily Express reported on Twitter on Monday, May 6.

In a statement to People, palace officials also confirmed the news, sharing: "The Duchess went into labour in the early hours of this morning. The Duke of Sussex was by Her Royal Highnesses’ side. An announcement will be made soon."

Until today, it was unclear how exactly the Duke and Duchess of Sussex would announce their first child was, quite literally, on their way to making their grand debut. Weeks before Markle went into labor, she and Prince Harry made a rare announcement about their "private" birth plan, putting an end to speculation about whether Markle would pose for photos hours after giving birth, as the world has grown to expect with royal births.

"The Duke and Duchess of Sussex are very grateful for the goodwill they have received from people throughout the United Kingdom and around the world as they prepare to welcome their baby," a Buckingham Palace spokesman said in a statement on April 11, according to Vanity Fair. "Their Royal Highnesses have taken a personal decision to keep the plans around the arrival of their baby private. The Duke and Duchess look forward to sharing the exciting news with everyone once they have had an opportunity to celebrate privately as a new family."

Although the Duke and Duchess of Sussex have decided to keep things private and celebrate as a family first, they didn't leave royal fans and the media completely in the lurch.

As People reported earlier in April, the palace did confirm that it would make an announcement when Markle went into labor, as they did today, and once she does give birth, it's likely that grand announcement will happen on the couple's new Instagram account, @sussexroyal. So if you're not following them already, be sure to do that ASAP.

And as the Daily Mail's Rebecca English reported on Twitter, Markle and Prince Harry are expected to "facilitate a photocall around two days" after the Duchess of Sussex gives birth and they enjoy some special alone time with family.

So about two days from now, the world might get to meet Baby Sussex and see Prince Harry and Duchess Meghan as fully fledged parents to their newborn.

Leading up to Markle going into labor, according to The Daily Express, she had been on maternity leave from her royal duties to prepare for their baby's arrival, just as her sister-in-law Kate Middleton had done ahead of the births of her three children. Prince Harry, however, had been busy making his royal rounds and making the world swoon.

In March, while Markle was fully on maternity leave, Prince Harry was spotted explaining his wife's pregnancy to a bunch of kids and it was as adorable as you'd expect. As Harper's Bazaar reported, Prince Harry mimed "a baby bump" as he explained that he and Markle are going to have a baby. See the adorable moment below...

Now with Markle in labor with their royal baby, it's only a matter of time before the world gets even more cute moments like this from Prince Harry. The world is obviously wishing Markle a safe and happy delivery and is waiting on pins and needles for Baby Sussex's debut.