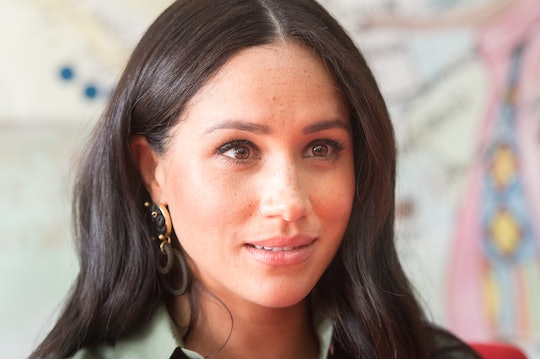 The Duchess of Sussex might have had her own lifestyle site called The Tig in her pre-royal days, but Meghan Markle isn't on social media any longer as an exercise in "self-preservation." Considering how much constant vitriol is sent her way online from critics on both sides of the pond, this seems like a pretty sound decision.

On Tuesday, Markle took part in Fortune's Next Generation Summit by participating in a virtual interview with associate editor Emma Hinchliffe. The two women discussed brand building and online engagement, with Hinchliffe asking Markle, "What are the strategies that you have developed for continuing to engage in a healthy way, and reducing any harm to yourself from any of the more negative elements that are out there?"

"For my own self-preservation, I have not been on social media for a very long time," Markle explained. "I had a personal account years ago, which I closed down, and then we had one through the institution and our office that was in the U.K., but that wasn't managed by us, that was a whole team. And so I think that comes with the territory for the job you have. I’ve made a personal choice to not have any account, so I don’t know what’s out there, and in many ways that’s helpful for me."

While Markle herself stays off social media, she admitted during the same Fortune interview that she has "concerns for people that have become obsessed with it."

"And it is so much a part of our daily culture for so many people that it's an addiction like many others," she added. "There are very few things in this world where you call the person who is engaging with it a user. People who are addicted to drugs are called users and people who are on social media are called users. There is something in there, algorithmically, that is creating this obsession."

Both Markle and her husband have spoken out about the impact of social media on mental health, with Prince Harry writing an op-ed for Fast Company about the divisive nature of social media as well as holding companies like Facebook accountable for the potential spread of misinformation.

Markle's decision to stay away from social media is not impeding her ability to speak out for what she believes in. In recent weeks, she has been advocating for people to exercise their right to vote in the 2020 election during interviews with people like Gloria Steinem, as well as speaking out against systemic racism in support of Black Lives Matter in June. Her voice is being heard. Just not by engaging on social media.