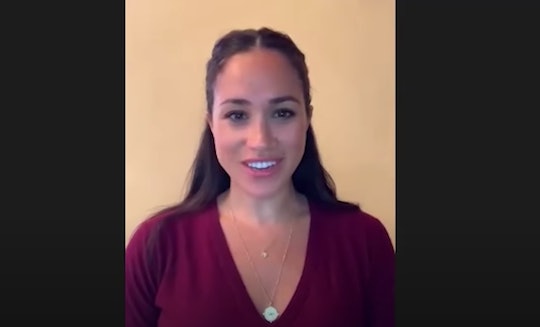 Since stepping back from royal life and settling in Los Angeles with her family, Meghan Markle has made two Zoom call appearances. This time? The Duchess of Sussex hopped on a video call to give a little pep talk and, yes, I think we're all experiencing some FOMO that we weren't on the receiving end. Fortunately, footage of the call has been shared on social media, so we can all get some of that Meghan Markle motivation.

Last month, Markle spoke with a client of Smart Works, a UK charity that provides coaching tips and professional attire to unemployed women for job interviews. (Markle became a patron of the charity in January 2019.) In a recorded video from the conversation, which took place on March 27, Markle told the woman, "You seem incredibly confident and prepared. I know everyone here is so excited."

"I just wanted to call in and wish you the best of luck and my fingers are crossed for you," she added. "There's so much going on in the world right now and to be such a beacon of hope and focusing on getting through it, and all the positivity that we just want to send your way, and to make sure you can get on the other side of this, too, and have such a great opportunity there."

The client was, understandably so, thankful for Markle's words of support. "I just wanted to say a big 'thank you' to you, the Duchess, and the whole team at Smart Works for making this possible for women all around the UK, because to see such work is truly inspiring," the client said after the interview, according to a tweet from Smart Works.

The Duchess of Sussex has been a patron of Smart Works for over a year now and back in September, she released a clothing collection in collaboration with the organization to provide women with work-appropriate and fashionable clothes that they need to enter the workforce, as Town & Country reported.

Markle reportedly spoke to the client from her new home in Los Angeles she lives in with Prince Harry and their 11-month-old son Archie, according to People. Before this Zoom call, Markle connected with another across the pond from her home via video call and spoke with a group of women from the Hubb Community Kitchen in the United Kingdom to commend them on their work to keep people in need fed amid the ongoing coronavirus outbreak.

While it's impossible to predict when Markle will hop on another video call, we do know that she and Prince Harry plan to share a brand new photo of their son Archie in honor of his birthday next week.