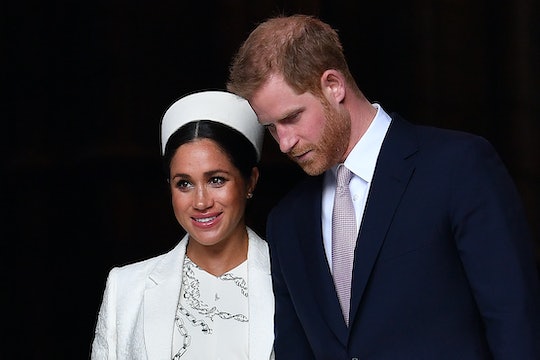 You might think you're having a rough day, but please know that your day is not as rough as a pregnant woman who has gone past her due date. Imagine if you have to wait for almost a year for this thing you're growing and then finally the day comes and it's like, just kidding now go ahead and wait some more but this time with a person pushed against your bladder always. This is how the Duchess of Sussex is presumably feeling right now. Tired and frustrated and tired some more. While Meghan Markle might have passed her due date, don't worry too much about her because she's got some pretty regal support to make her feel better.

Markle and her husband Prince Harry are presently ensconced at their new home of Frogmore Cottage on the grounds of Windsor Castle awaiting their first baby. While the baby's due date was never officially shared, the proud expectant mom accidentally let it be known that she was due around the end of April during an official visit, as per The Telegraph. And I'm not sure if you've noticed but the end of April has, like, one day left at this point.

Which means the poor darling has presumably gone past her date.

As frustrating as that is for Meghan Markle and also for the rest of us who have been waiting so patiently for this new royal baby (because we matter too guys), at least she seems to have some people around to support her. One fairly important person in particular: Queen Elizabeth II herself. The longest reigning monarch in history paid Markle a visit over the Easter holidays, as per The Daily Express, and I don't want to be presumptuous here but I really hope she brought her chocolate. It's very comforting when you're sitting around waiting to have a baby, trust me on this.

Queen Elizabeth could well have had an ulterior motive when visiting Markle, in my opinion. As her birthday fell over the Easter weekend on April 21, maybe she was trying to see if she could issue a royal decree over her granddaughter-in-law's belly and coax the baby out so they could share a birthday. After all, ABC News reports that people all over Great Britain are betting that the baby will be a girl and her name will be Elizabeth... they might as well share a birthday as well.

The Queen isn't the only one to offer Markle a little comfort as she passes her due date; Prince William and Kate Midleton, her brother- and sister-in-law, reportedly also visited Frogmore Cottage over the holidays as per Harper's Bazaar, despite the media's insistence that they are always and forever feuding. I mean, who would feud with a pregnant woman, I ask you?

Despite the fact that Meghan Markle is passing her due date please don't go worrying that she is at risk. Depressingly, a baby isn't even considered overdue until 42 weeks gestation, as per the Mayo Clinic, which means she's just playing the worst waiting game in the world.

At least she has some lovely royals to pop by her new digs for visits. They can't do much about the whole being exhausted thing but hopefully they can keep her a bit distracted.