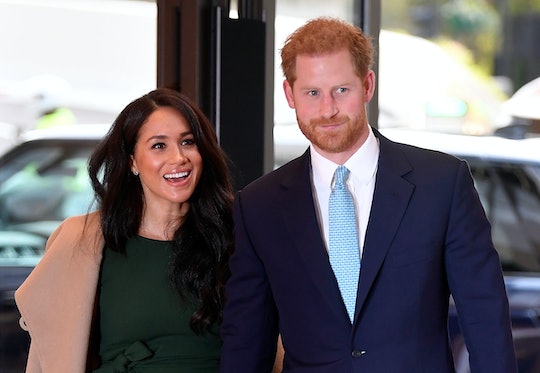 The Duke and Duchess of Sussex took to their official Instagram page on Thursday to wish Prince Harry's father, Prince Charles, a happy birthday. The Prince of Wales celebrated his 71st birthday on Nov. 14 with messages from several members of the royal family on social media, including both of his sons Prince William and Prince Harry.

Now that Prince Harry is a father himself, his birthday message to his own dad included a new relationship in both of their lives: the one they share with little Archie, who was born on May 6. Prince Harry and Markle took the opportunity to share a new photo of their son Archie at his christening with his father and grandfather on Instagram with the sweet caption, "Happy birthday to His Royal Highness The Prince of Wales - Sir, Pa, Grandpa!"

The photo is from July, and both Prince Charles and Prince Harry look so utterly besotted with baby Archie that it's enough to bring tears to your eyes.

Prince William noted in a 2018 documentary about his father, Prince, Son and Heir: Charles at 70, that he wants his father to slow down a little to enjoy time with his grandchildren, especially since he's "brilliant" with them. "Having more time with him at home would be lovely, and being able to, you know, play around with the grandchildren. Because when he’s there, he’s brilliant," Prince William said. "But we need him there as much as possible.”

Prince Charles is currently celebrating his birthday out of the country on an official royal tour of India, according to the Daily Mail, so while he won't be with his sons and grandchildren on his special day, hopefully seeing these photos was a touching treat.