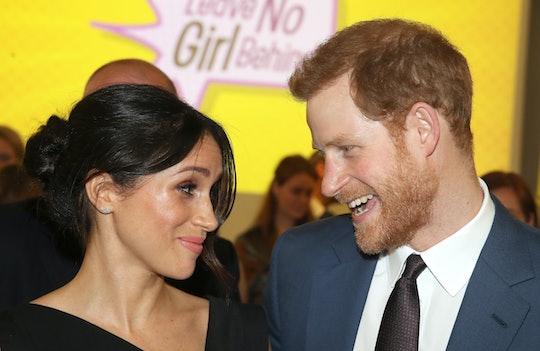 When you're living in the United States it's, admittedly, easy to get wistfully wrapped up in the affairs of other heads of state. We fangirl over Canadian Prime Minister Trudeau, we pine over our beloved ex Barack Obama, and we get even more wrapped up in all things royal family. So the impending marriage of Prince Harry to Meghan Markle comes at just the right time. But is this a match written in the stars? No, because that's not how human relationships work, but Meghan Markle and Prince Harry's astrological signs do lend themselves to the rom-com/fairy tale narrative of "handsome prince marries all-American girl." (Besides, it's as good a distraction from the current political mess we have on our side of the pond.)

Markle was born August 4, so she is a Leo, which, for an actress and public figure, makes a substantial amount of sense. Not only does a Leo not mind being the center of attention at a big party, they actively seek it out... which is great news for a woman whose wedding will be broadcast internationally to an audience of millions, and who will be obligated to spend the rest of her married life at least partially in the public eye.

Leos are among the most fun of the star signs. Everyone loves a Leo, and if you don't at first they will usually win you over (being liked it pretty important to them). They are known for their charisma, creativity, bravery, cheerfulness, and leadership. They're also natural problem solvers, applying their "think big" mentality to issues that would scare off less brassy signs. Left unchecked (or, frankly, on a bad day) these admirable qualities can morph into egotism, stubbornness, callousness, and aggression.

In relationships, romantic or otherwise, Leos are your ride or die: they are passionate, loyal, expressive, and dominant. They love you with their whole heart, but definitely value their independence and ability to have things their way.

Prince Harry was born on September 15, making him a Virgo. Virgos are a lovely, calming, patient (and immaculately tidy) presence in anyone's life, but they (like anyone else) are not without their flaws. The premium they place on order and perfection can sometimes get nitpicky and judgmental. Their reservedness can sometimes come across as cold and emotionally stingy.

In other words, if you had a made for TV movie about a dignified prince who meets a fiery American actress and they wind up falling in love in an "opposites attract" story arc, you'd have a fictional version of Prince Henry and Markle's otherworldly romance.

That's not to say that these two have nothing in common, though. In fact, they're both determined, loyal signs that, when they get to know each other, complement one another beautifully. When they can compromise on their very different styles and combine their strengths, they make for a great team. Think of it this way: if Leos are the stars of the show, Virgos are the stage managers. They might have different roles to play, but the show can't go on without both of them. Given that both the bride and the groom have demonstrated a strong commitment to humanitarian work, I look forward to seeing all they can accomplish together as, essentially, professional do-gooders.

Of course (and this is a sad admission for a status-minded Capricorn) I don't personally know Markle and Prince Harry. I don't know if she's a quintessential Leo or if he's a particularly Virgo-y Virgo, or if their relationship looks anything at all like what the archetypes of the Zodiac suggest it would be. After all, astrology is a lot of fun but it's just that: fun. We can guess and assume all we want, but the other people who truly know Prince Harry and Markle's relationship is, well, Prince Harry and Markle.

Still, it can be a fun way to think about different personalities and relationships and, like a grand royal wedding of a prince and a glamorous actress, provide a welcome respite from real life for just a little while.