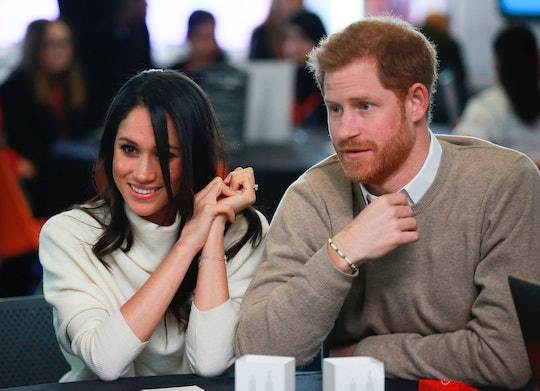 To help bring awareness to the challenges millions of young girls and children face when it comes to education, Meghan Markle and Prince Harry will mark International Day of the Girl with a virtual chat with Pakistani activist Malala Yousafzai. Both Yousafzai and Markle have a long history of dedicating themselves to women's rights, access to education, and gender equality, and with Prince Harry there as a proud feminist the conversation should be one for the ages.

The Duke and Duchess of Sussex's virtual chat with Yousafzai is set to happen live on Sunday, Oct. 11, in conjunction with International Day of the Girl, a day created by the United Nations to bring "attention on the need to address the challenges girls face and to promote girls’ empowerment and the fulfillment of their human rights."

Their discussion will start live streaming on the Malala Fund YouTube and social media channels at 4 p.m. EST. According to the event's description, the trio will be discussing "the barriers preventing 130 million girls from going to school and why it’s essential that we champion every girl’s right to learn," an issue both Markle and Yousafzai have been bringing awareness to for years.

At just 17 years old, Yousafzai won a Nobel Peace Prize for her efforts to ensure women and children had access to education in 2014, just two years after the Taliban attempted to assassinate her in 2012 for speaking out.

As for Markle, she has been advocating for gender equality for years. When she was 11 years old, she wrote a letter to Proctor & Gamble after a commercial for dishwashing liquid was marketed only to women. The company went on to change that commercial and the die was cast.

Since then, Markle went on to focus her charitable patronages as a member of the royal family on organizations aiming to help women like SmartWorks, a British charity working on helping women get back into the workforce, and the Association of Commonwealth Universities, the world's first international university network.

Markle's first speech as a member of the royal family was given on the topic of educating girls at the University of the South Pacific in Suva, Fiji in 2018. "When girls are given the right tools to succeed, they can create incredible futures, not only for themselves but for all of those around them," she said at the time, according to People. "And while progress has been made in many areas across the Commonwealth, there is always scope to offer more opportunities to the next generation of young adults, and specifically to young women."

As for Prince Harry, Markle told feminist icon Gloria Steinem in a recent interview that she and her husband are raising their 1-year-old son Archie to be a feminist. "I look at our son and what a beautiful example that he gets to grow up with a father who is so comfortable owning that as part of his own self-identification," Markle said. "That there’s no shame in being someone who advocates for fundamental human rights for everyone, which of course includes women."

Young girls around the world are receiving better access to education thanks to efforts by the United Nations. But work still needs to be done. And Meghan Markle, Prince Harry, and Malala Yousafzai are working to make sure things continue to improve.

More Like This
You’ve Probably Been Pronouncing “Lilibet” All Wrong
Meghan Markle Calls On Men "To Be Vocal" In The Aftermath Of Roe v. Wade Ending
Meghan Markle Proves Once Again She's Totally Going To Be A Snack Mom
Prince William Shares How He Plans To Follow In His Mother's Footsteps With His Kids