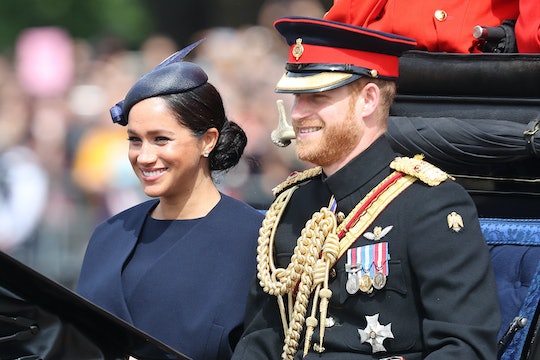 Meghan Markle Was All Smiles At Her First Post-Baby Appearance

Saturday was a sensory overload kind of day for royal watchers. It was the day of Trooping The Colour, a massive military parade held annually in honor of Queen Elizabeth's 93rd birthday. Because the parade is always such an auspicious occasion the entire royal family tends to show up on the balcony at Buckingham Palace en masse. Which means royal fans were treated to several exciting sights at once: Prince Louis' first royal appearance and Meghan Markle's first post-baby appearance... with none other than her sister-in-law Kate Middleton. It was just too many things at once and now we all need a hot second to get over the excitement.

As we all remember, Meghan Markle gave birth to her first son with husband Prince Harry, Master Archie Harrison Mountbatten-Windsor, just over one month ago on May 6. The couple introduced their baby boy briefly to the media two days later, but since that time Markle has been enjoying her maternity leave with her son at the couple's home at Frogmore Cottage out of the spotlight. On Saturday she joined Prince Harry and the rest of the royal family to celebrate Queen Elizabeth's official birthday, her actual birthday being April 21, per Global News. The new mom was all smiles arriving via carriage with her husband, her mother-in-law Camilla Parker-Bowles, and her sister-in-law Kate Middleton.

The two women have struggled through a year of rift rumors and have clearly come out the other side with their own dignity in tact, which is such a lovely thing to see. Despite all of the media reports on both sides of the ocean with "sources" claiming the two women were in a feud, neither has made any effort to acknowledge them in any way. Now here they are smiling together and looking as relaxed as anything... in coordinated side buns, no less.

This isn't the first time the pair have been together in the past few months, of course. After Archie's birth, Middleton and her husband Prince William told reporters, as per Elle:

As William said, we look forward to meeting him [Baby Sussex] and finding out what his name is going to be. So it’s really exciting for both of them. And I’m wishing them the best in these next few weeks. It’s always a bit daunting the first time around.

Daunting is right, and Markle's first post-baby appearance presumably felt a bit daunting as well. Fortunately for her, she was surrounded by family who all looked the picture of happy support. Especially her husband Prince Harry as the couple stood on the Buckingham Palace balcony.

Meghan Markle could not have looked happier at this year's Trooping The Colour if she tried. In fact, I would even go so far as to say she looked considerably more relaxed than she did last year, the first time she attended just a month after her wedding.

That's sort of the way it is when you marry into a family, right? At first it feels a bit awkward and you need to find your place. And if you're lucky, after a little time things just start to feel more natural.

I think we can safely say Meghan Markle is one of the lucky ones who found her stride in her new family.