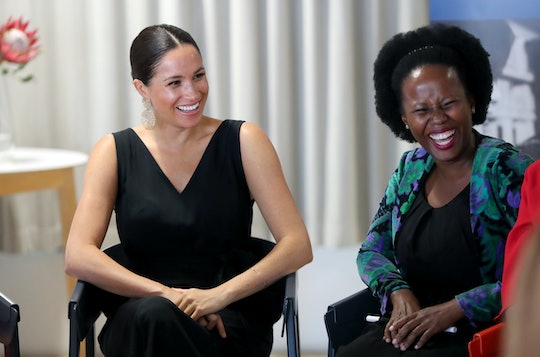 Meghan Markle's Speech About Fulfilling Her Own Desires Is Inspirational

Meghan Markle has caught a whole lot of flak from the British tabloids in particular since marrying Prince Harry in May 2018. For several reasons that all seem to me to boil down to the same thing; she is very much her own person. Not a day goes by without a headline accusing her of breaking some royal tradition or rule, and I've often wondered if that must be unbearably hard for her. Well, I need wonder no more. During her royal visit to Africa, Meghan Markle gave a speech about fulfilling her own desires. Because she is someone who understands the importance of being true to yourself no matter what anyone says. Even the media.

The Duke and Duchess of Sussex are in the middle of their 10-day royal tour of southern Africa with their 4-month-old baby boy Archie, and if you haven't been following their progress you are missing out. The entire family looks at once more relaxed and more energized than they have in ages, perhaps because the continent of Africa has special personal significance for both Prince Harry and Meghan Markle. Prince Harry managed to find some healing time in Africa after the 1997 death of his mother Princess Diana, and of course the couple fell in love with each other during a trip to Botswana in 2017.

And of course, both Prince Harry and Meghan Markle are passionate about their own philanthropic work in Africa. Something they have chosen to take time separately to focus on during their trip. For Prince Harry, it's environmental activism. For Meghan Markle, she is as determined as ever to shed a light on empowering women.

As Prince Harry set off for his solo tour of Botswana, Meghan Markle stayed in Cape Town, South Africa for a private meeting with female tech company founders called Ladies Who Launch. During her meeting she reportedly spoke to the women about the importance of being role models, not just for little girls but also for little boys like her son Archie as well. Naadiya Moosajee, as per Pop Sugar Family:

We both have sons, and we were bearing in mind that we are not just role models for girls but boys — and not just our sons, but generally in public too.

Markle, who has a long history of working to empower women as a staunch feminist even before she became the Duchess of Sussex, also opened up about remaining steadfast in your own beliefs and desires with the group of entrepreneurs. Matsi Modise, who is the founder of a skills training company called Simodisa, told People:

She talked about being a mother and having duties as a duchess and fulfilling what her heart desires — and that it can’t just fade away now that you’re a duchess. That you have to be true to who you are.

I think Meghan Markle is setting a pretty amazing example not just for mothers who might need a reminder that they are allowed to honor their own desires, but women in general. We tend to get caught up in all of our other roles and titles and it's easy to get lost in the person we are to other people.

If Meghan Markle can remain true to herself despite a daily barrage of criticism, I guess I can too. And so can you.