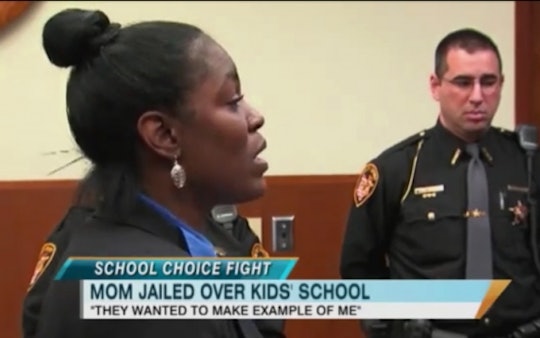 Every parent probably wants the best for their kids, I think. At a minimum, you want your kids to start their lives with at least a blank slate. Start life without any kind of impediment or deficit holding them back. I would like to think this is one of those parenting commonalities that connects us all. And I think Kelley Williams-Bolar would very much agree with me. Williams-Bolar is the mom who was jailed for lying to get her kids into school, and she's spoken out about the college admission scandal with an interesting take.

Back in 2011, Williams-Bolar was sentenced to 10 days in jail in Ohio for something I can absolutely relate to: She changed her daughters' home address on school records to make it seem as though they lived in a better school district. In 2009, Williams-Bolar was a single mom living in an inner city neighborhood with two daughters, aged 12 and 9 years old at the time, The Hill reported. She wanted her children to go to Copley Fairlawn School District, which was apparently a considerably better school in a mostly-white neighborhood, as per TODAY. The desperate mom told the news outlet that her father lived in that district and suggested she use his address... which eventually saw her found guilty of grand theft and tampering with evidence.

She was sentenced to 10 days in jail, two years of community service, three years of probation, and a $70,000 fine, as per ABC News. All because she wanted her children to have access to a better education and with that, a better future. Williams-Bolar told TODAY:

I wanted them to have a good start in life. I wanted to send them to one of the best schools. What I did was not in the best interest of my daughters.

Williams-Bolar's situation is obviously a far cry from the college admission scandal that allegedly saw dozens of wealthy, privileged parents fraudulently trying to get their kids into elite colleges, as per Variety. While Williams-Bolar lied to simply offer her daughters the opportunity to access education, these parents allegedly paid college admissions consultant Rick Singer huge amounts of money to ensure their kids would get into school, regardless of merit. But Williams-Bolar is actually empathizing with at least two of the well-known parents who have been charged in relation to the case; actresses Felicity Huffman and Lori Loughlin.

While Williams-Bolar acknowledges that the women accused "already had so much and wanted more," she also told TODAY she recognized something in Huffman and Loughlin:

Of course there will people who disagree with Williams-Bolar. People who think this is simply a story of privilege and greed, and to be honest I might agree.

But can we all just take a moment to appreciate the massive amount of empathy this mom just displayed? Regardless of whether or not you agree, we need more of this.