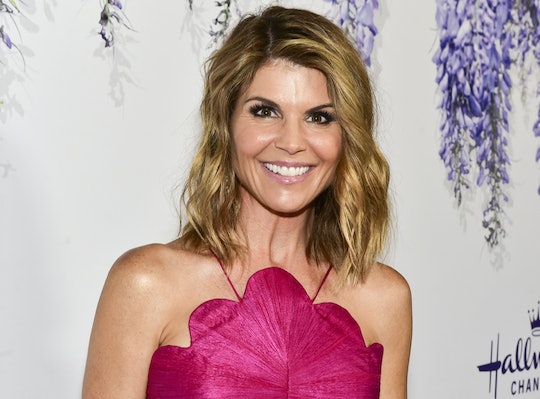 Now that the country is coming to terms with the massive college admission scandal, you had to know the fallout was coming. On Tuesday the FBI announced they had indicted 50 parents and school officials in the biggest college admission scam in U.S. history. The investigation, which included 200 FBI agents and was coined "Operation Varsity Blues," found that parents were allegedly paying to have their children accepted into prestigious universities through fraudulent methods. And now, here come the lawsuits. The first and perhaps most shocking one? A mom is suing Lori Loughlin and other college admission scanners... for $500 billion.

Jennifer Kay Toy, a mother of one and former teacher from Oakland, California, filed a lawsuit against 45 of the 50 accused parents (including Fuller House actress Lori Loughlin and Desperate Housewives actress Felicity Huffman, both of whom have been charged with conspiracy to commit mail fraud and honest services mail fraud) and officials named in the college admission scandal on Friday. As she noted in the lawsuit, which was obtained by E! News, she believed her son Joshua was not given a fair shake when he was applying to colleges recently; "Because of Joshua's hard work and study he graduated with a 4.2 grade point average. I couldn't be more proud. Joshua applied to some of the colleges where the cheating took place and did not get in."

Toy went on to explain that both she and her son believed he should have been accepted into these colleges but didn't make the cut, as Jezebel reported, and now she's suing the parents involved in the case because she believes their actions could have directly affected her son's chances. Still, the colleges and the reason he was not accepted remain undisclosed, according to the lawsuit obtained by E! News:

I'm now aware of the massive cheating scandal wherein wealthy people conspired with people in positions of power and authority at colleges in order to allow their children to gain access to the very colleges that Joshua was rejected from. Plaintiffs simply wanted a fair chance for themselves or their children to go to a good college, and that opportunity for a fair chance was stolen by the actions of the Defendants… who feel that, because they are wealthy, they are allowed to lie, cheat and steal from others.

Unsurprisingly, Twitter has some feelings about this lawsuit. Some positive and some less so.

Another lawsuit was also brought forth by two students against those involved in Operation Varsity Blues, Erica Olsen and Kalea Woods, as per CBS News. In this case the students claim they were denied a fair chance of being accepted into Yale University or the University of Southern California because of these actions. Olsen has since dropped her name from the lawsuit but other parents and students have joined, although they are asking for considerably less than $500 billion. CBS News reported that their lawyers said in a statement:

The students want their money back. They request that anyone who paid an application fee to any of the eight named universities but was denied admission gets their application fee returned.

With any luck these lawsuits will serve at least one purpose; they will help change a broken system and encourage colleges to accept students solely on their own merit and nothing else.

More Like This
Can We Fix The One Big Problem With The PTA?
How To Get Free & Inexpensive Back-To-School Supplies
These 21 Educational Board Games Are Perfect For Homeschoolers
7 Questions To Ask Your Child's Kindergarten Teacher