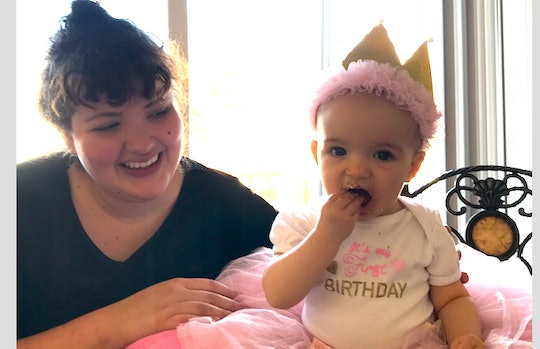 Moms Aren't Supposed To Say This, But I So Wish I'd Waited

I used to have an idea of what my twenties would look like. I'd live in New York, where I'd spend my days working in journalism and networking with fancy media types like Meg Ryan did in When Harry Met Sally. On weekends, I'd eat up all that the city had to offer me, from museums to pre-war architecture to riverside walks. I'd read voraciously in the afternoons, but party with my friends in the evenings. We'd bond over rum and Cokes with a side of tightly-rolled spliffs. Then I'd go home to a caring and open-minded partner: Someone ultimately devoted to our relationship, but happy to be ethically non-monogamous as well.

By 24, everything was coming together. I worked full-time as an editor at a women's site that I adored. I had the loving, progressive partner. I had friends with whom I could stay out until dawn on the weekends, and others who preferred quiet strolls in Central Park. Above all, I had the luxury of selfishness. I could make choices for myself first, my partner second, and no one else third. This, I believed, was the decade for self-care, adventures, and misadventures.

I expected to put myself second, third, or even fourth. I just didn't expect to do it so soon.

By 25, however, my partner and I were in for a surprise. Having been told for years that pregnancy was out of the cards for me thanks to severe Polycystic Ovarian Syndrome, I never thought I had to worry about accidentally being knocked up. When I pictured having kids, I imagined us adopting or using a surrogate later on. Nonetheless, we found ourselves at a walk-in women's clinic one September morning. There we'd learn that I was 20 weeks pregnant. That the baby was a girl.

My daughter Luna is almost a year old now. I love her more than I've ever loved anyone or anything. Sometimes I don't think my body can contain all the love I have for her. I worry that I'll implode. My cause of death will be cuteness overload. My life is different now, though. It's complicated. It's exhausting in ways I never could've conceptualized. Sometimes it doesn't feel like it's my life at all. So if there's one secret I have — one thought about motherhood that I wish I could say, but haven't up until now — it's that I wish I'd had my first child in my thirties.

There are reasons I don't often bring this up. I know some folks will take it as a despicable admission: A sign that I don't care for my daughter as much as I claim to. Or, worse still, that I don't deserve to be a mother at all. That my daughter deserves better.

Some will deem it completely selfish: A characteristic we're taught is utterly undesirable. A word that women, in particular, are arguably conditioned to avoid from day 1. I think of this when I look at Luna's baby dolls, feeling as though little girls are being brainwashed into becoming caretakers before they have even the slightest concept of their own wants and needs.

I won't deny that there are pros to being a young mother. I will, hopefully, be around to see more of my daughter's life.

I don't believe that wanting to prioritize yourself for a while is selfish, though. I had wanted my twenties to be "my" decade because I was fully prepared to dedicate much of the rest of my life to others. I expected to settle down with a partner. I expected to be unconditionally present for my kid(s). I expected to climb the ladder at work, making decisions that would benefit not only myself, but my colleagues. I expected to put myself second, third, or even fourth. I just didn't expect to do it so soon.

I won't deny that there are pros to being a young mother. I will, hopefully, be around to see more of my daughter's life. I don't have any chronic aches or pains, and can roll around with her for hours on end. Maybe I won't be too out-of-the-loop by the time she's a teenager. I won't have to break out Google every time she mentions a singer, TV show, or book she's enjoying. I get to experience this unique, beautiful, and wholly heartwarming relationship sooner rather than later. For all of this, I'm grateful.

Sacrifices are required in order to be a parent, though. I try my best to balance personhood with parenthood — to carve out time for myself and my interests outside of being a mom. Time and balance still allude me, as they do so many parents. Most days, I feel lucky if I get to shower. It's a good-ass-day when I wash my hair. It's a goddamn miracle when I'm on time for a doctor's appointment, when I answer all the texts I've received in the day, or when I catch up IRL with a friend.

Clearly, the aesthetic of my life looks a lot different than I thought it would at 24. We've traded New York City for the British countryside, where my partner is from. It was the best move we could've made. Rent is cheaper, healthcare is free, and my daughter will get to grow up surrounded by fields to explore and animals to play with. There is a major city only 30 minutes away, where she'll be exposed to museums, foreign cuisine, people of so many cultures, and rad shopping. Sometimes, though, I miss the feeling of New York. I miss feeling like anything can happen, at any time of day. Like an adventure is only ever a block or two away.

I also traded my full-time media job for part-time freelancing. This means I can work from home and be more available to my kid. I can save on childcare costs, and be here to watch all her milestones. I'll probably never make as much money as I could've in Manhattan (and as a result, I'll never accumulate as many shoes), but luckily I don't need as much money to get by where I now live. I don't seem to need as much stuff at all.

While I still have friends with whom I can party or take contemplative strolls if the mood strikes, I don't have the time to see many of them. I still have the partner, but unfortunately we don't often get the one-on-one experience so important to relationships. I can't remember the last time I read a whole book, cover to cover. Or the last time I visited a museum.

There are swings and roundabouts to every change that my family and I have experienced in the last year. Most of the time, I feel as though I'm exactly where I need to be. This, however, doesn't mean I don't miss where I could've been. Frequently, I do — and I mourn for the things I may never get to do. For the things that will be a lot harder now.

This is why, if given the choice all over again, I would likely choose to wait. I would choose to wait until I felt more well-rounded and sure of myself. I would choose to wait until I achieved more professionally. Until I read more books. Until I spent more weekends staying up all night, consumed by the freedom of being young, alive, and ultimately carefree in New York City. Or at least more carefree than you are when you become a parent. I would've waited until I spent more time being selfish. Maybe this would've better prepared me for the transition into selflessness.

This does not mean that I do not love my daughter. It doesn't mean that I'd trade her for the chance to party again, or the opportunity to smoke Mary Jane without getting paranoid. It just means that — as much as I adore her — she is now my everything. And, since we're being so honest, I wanted to be my own everything for just a little while longer. I think we all deserve that.

More Like This
41 Strong & Sweet Baby Boy Names That Start With “K”
20 Stocking Stuffers For Kids Under $20
Festive Mommy & Me Holiday Nail Ideas To Try
101 Advent Calendar Activities, From Books To Read To Cookies To Bake