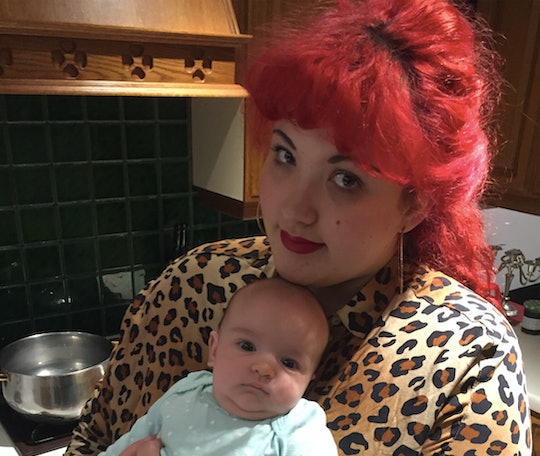 My Baby Was A Surprise — Not A Mistake

"So, how much do you regret this whole baby thing?" "What's it like to know you've sacrificed the bulk of your 20s?" "Are you calling motherhood a mistake yet?"

While I sometimes wish they were a product of my imagination, those comments are actual questions I have been asked since deciding to have a child. They've all come from friends who — much like myself only a year ago — cannot fathom spending this particular decade of their lives covered in anything but the scent of LUSH fragrances atop last night's post-work rum and cokes.

My baby was a surprise, you see. Thanks to pretty severe Polycystic Ovarian Syndrome that's left me period-free for years and supposedly infertile — according to many, many doctors — I never imagined pregnancy was in my cards. Despite that, I've been on birth control since I was 13 years old in an attempt to regulate my hormones.

For 20 weeks in 2016, I had no reason to suspect that I was, in fact, pregnant. I had no symptoms, no weight gain, no tangible alterations at all — until my nipples suddenly changed color and I decided to take a pregnancy test on a whim. Even then, I figured it had likely been three weeks or so. A couple of days later, my partner and I were in a tiny sonogram room being told we were over 20 weeks in and that there was a little girl inside me.

At 20 weeks, I still had plenty of options of course. I thought deeply about them all. There was, however, something pretty perfect about finding out in the way I did. Though I have always wanted a baby, I also tend to be riddled by crippling anxiety on a near daily basis. Even if I hadn't been misled to believe that I was 100 percent sterile, motherhood was likely something I would have put off indefinitely.

Sure, this baby was a total surprise. But since when are surprises a bad thing?

"We can barely pay our bills," I'd muse to my partner whenever the subject of kids would come up. "What if I pass down the myriad mental health issues running rampant in my family?" "What if we end up having to give up our hopes and dreams and plans for travel?" "I just don't think I want to be so tied down right now."

Something tells me that all of my paranoias and concerns would've prevented me from ever actually trying to conceive, so when choice was essentially taken out of the equation and I found myself staring at some high-frequency sound waves in the form of tiny hands and tiny feet, my gut instinct ended up screaming, "Why the hell not?" Sure, this baby was a total surprise. But since when are surprises a bad thing?

Somewhere along the way, though, I started to realize that surprises are often perceived as synonyms for mistakes — at least, when it comes to unplanned pregnancies. Although the average age of first-time mothers in the United States was 26 in 2016, as per reports by the Centers for Disease Control and Prevention, that number was closer to 28 in New York state, where I was living at the time. I was 25 and absolutely no one of a comparable age in my immediate circle of friends and colleagues was even thinking about babies. From my experiences, the professional millennial women I know are, by and large, waiting until their mid-30s to start thinking about it.

There are plenty of reasons to wait to have a child, to not have one at all, or to have one young. And it's certainly not my place to police anyone's choices in this department, whatever that may be. But here's the thing: There's also a lot of skepticism and fear surrounding the implications of parenthood. When deciding whether or not to have my daughter, I found myself holding onto a lot of them. I definitely questioned whether having a baby might be a mistake; whether it'd be something that stripped me of my identity and restricted me to a homebound life void of traveling, adventures and misadventures, drunken parties, perfectly rolled spliffs, self-care, self-fulfillment, and actualization in categories outside of motherhood.

The more time I have with my baby, the more time I realize that none of this has to be true (no matter how overwhelming balancing it all might sometimes seem). What I'm also realizing is that, in the eyes of many, it will all seem very, very true regardless of how hard I try to prove them otherwise.

And so my baby is cause for lamentation by some: The friends who wonder whether I'm not going out this Friday night because I truly don't want to this time around, or because my baby is keeping me indoors against my will; the professional acquaintances who feel "so sorry" about my choice to transition out of an in-office position at a major women's website into the at-home freelance life; the older family members who really got behind the idea of waiting to become a mother, feeling like they could live vicariously through my fancy-free 20-something life; the total strangers who read about my surprise baby on the internet before she was born and tweeted me about not "giving up my life" so young.

In actuality, I've gained far more than I've sacrificed. The sleep lost, the changes in my body, the changes in my mood, in my life — they're a pretty inexpensive price to pay in exchange for having the person who has very quickly become my best friend. Any mild inconvenience is just that, really: a mild, perfectly survivable inconvenience.

She has changed my life greatly, yes. But derailed it? Not at all.

When I think about mistakes I've made in this lifetime, my mind gravitates towards arguable errors in judgment. I think about this horrible dude I met in Portugal, a few neon-colored fashion faux pas in the earlier 2000s, the too-obvious lie I told my mom about meeting a high school love interest at a school concert and not on MySpace, and the choice to continue to pine over someone I knew beyond a doubt was a pathological liar, in no small part because he always bought me delicious pizza whenever we'd go out. Even these incidents, I do not regret. They were learning experiences that make for good drunken anecdotes, if nothing else.

My daughter, however, would never make such a list. My baby has been the biggest surprise of my life — beating out the moment I found out I got into NYU, topping that the time I met my long-term partner while studying abroad, more important than my dream job or the fact that I became close friends with someone from my hometown over half a decade after moving away, more important to me than the the positive progressions made in the plus-size fashion industry.

She has changed my life greatly, yes. But derailed it? Not at all. Made me question whether I'd made the wrong decision in having her? Never.