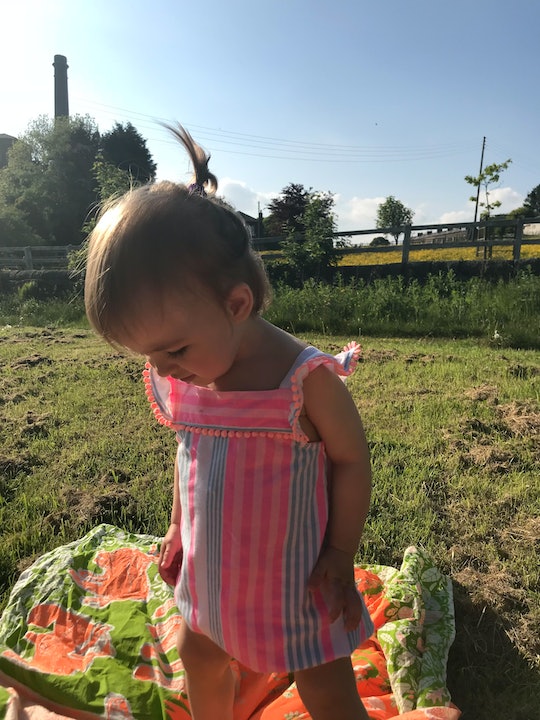 No, I'm Not Worried That My Bilingual Toddler Speaks More Spanish Than English

Long before I got pregnant with my first child, I knew that I wanted to raise bilingual children. Although I was brought up primarily in the States, my mom found ways of preserving our Colombian heritage from the moment I was born. This meant speaking Spanish to me religiously, while my dad stuck to English. I was exposed to both languages before I even knew what language was — and as a result, I picked them up naturally and equally. I may not agree with every decision my folks made when I was growing up (shout-out to reading through my diaries and AIM messages), but this is one I've always known I would someday try to replicate.

My daughter is 18 months old now, and my partner and I have another on the way. In these last 18 months, our first baby has heard mostly Spanish coming from me. Because we live in the UK and are surrounded by English speakers, I obviously have to break from the routine sometimes in order to communicate with other grownups. Still, Luna and I spend hours upon hours together each day. My husband, although not a native Spanish speaker, has backed me up by actively learning more Español and sharing what he knows with our kid. If we play YouTube videos and nursery rhymes, we try to find the Spanish versions as well. When my in-laws went on a vacation to Majorca recently, I asked that they pick us up some Spanish-speaking toys. My focus has been exposing her to this language (and this part of our shared culture) as much as I can, because I know English will be the dominant language in her life otherwise.

She currently speaks and understands way more Spanish. This has been pointed out to me with some hints of concern, as if I'm somehow interfering with Luna's development and assimilation into British life.

English, she hears from her grandparents, from my friends, from other children, from the cable TV when it's on in the background. She will go to English schools and consume English pop culture. Because of Luna's exposure to Spanish in the household, however — often coming from the relative she spends the most time with (me!) — she currently speaks and understands way more Spanish. This has been pointed out to me with some hints of concern, as if I'm somehow interfering with Luna's development and assimilation into British life. There are a lot of things I worry about when it comes to raising kids, and girls especially. This, though, isn't one of them. Like, not at all.

The way I see it, there is no fathomable way that Luna won't catch up when it comes to her understanding and usage of English. When she starts school, it will replace Spanish as the language she hears most regularly. When she begins to show an interest in television, film, and music, our geographical location will no doubt influence what she discovers. Although we're lucky to live only 30 minutes from Manchester — one of the most culturally diverse cities in the UK — English is still the prime language utilized everywhere in England, by nearly everyone. If my kid wants to converse with her grandparents, peers, and educators, she'll need to speak it, too. And she will.

There's plenty of precedence that proves this to me. When my mother moved my older brother from Colombia to the U.S. in the '80s, he didn't speak a word of English. At 5, the only language he'd ever known was that of his home country. It didn't take long before he learned, though. I've been told that four months into starting kindergarten in New Jersey, he had mastered English entirely (or as entirely as any 5-year-old can master a language).

According to The Annie E. Casey Foundation, a grant-making philanthropy focused on helping children, 22 percent of kids in the U.S. spoke a language other than English at home as of 2016. Of those 12 million kids, only 4 percent showed any difficulty speaking English. So despite what seems like abject fear that directing one's focus onto teaching children a language outside of their country of residence's prime one will prevent them from integrating into or succeeding within that country (something that, quite frankly, reeks of xenophobia to me anyway), I just don't buy it.

If anything, my fluency in Spanish and English only ever helped me when I was living in the U.S., as it continues to do so now that I live abroad. Professionally, employers see this as an asset; something that distinguishes me from other applicants and will no doubt come in handy. Socially, it enables me to meet, communicate, and bond with people I may never have gotten to know otherwise (friends, potential employers, and romantic partners included). Culturally, I am able to appreciate Spanish and Hispanic art in ways I could not have if my mother had eschewed teaching me her first language.

It feels like I'm somehow succeeding in preserving our Latinidad.

As a matter of fact, culture is at the heart of why I am not fearful of the trajectory of Luna's language development thus far. I adore the fact that "agua" was her first word; that she calls her father "papa" instead of "daddy;" that she can instantly tell you what sounds all the barnyard animals make if you name them in Spanish, even if she hesitates in doing so when asked in English. I love that she'd rather listen to Little Baby Bum's Spanish tunes than its English ones.

I love all of this because it feels like I'm somehow succeeding in preserving our Latinidad. I am half Colombian, but Luna is only one-quarter Colombian. Sometimes it feels as though my falling in love with a non-Hispanic partner ultimately means that our heritage is being chipped away at. Like it's inevitable that my kids will feel less connected to their roots because they possess less of those roots. Roots that were, and remain, essential components of the person I am. Roots I want them to know.

Luna may be "less Colombian" than me, but she is still Colombian. She is part of only the second generation of my family to be born outside of Medellin, but I will still do my damndest to make sure she knows Medellin. To make sure she can hold just as much of a conversation with her Abuela as she can with her Gran. To make sure she gets to soak up as much cultural beauty as possible, from all the places her parents come from and from all of those that they don't. I will make sure she knows what a gift language is, and what a gift it is to be able to possess the language needed to experience even more kinds of people, art forms, jingles, and places than she might've if we'd only ever taught her English. If we'd only ever allowed her to know half of her origins. If we'd done her that disservice.