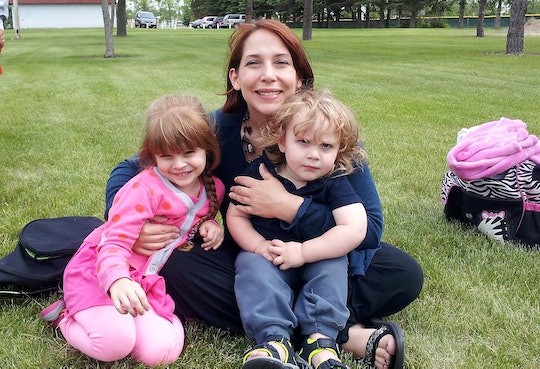 My Divorce Was The Best Part Of My Marriage

Every once in a while, and especially during the holidays, my relatives will tell me how sorry they are that I got divorced. And, inevitably, they'll ask why I didn't work it out "for the sake of my children." I'll hear about how long my grandparents were married, and how no one got divorced "back in those days." And when those comments and discussions occur, I just get really, really tried. Because the truth is I had a horrible marriage and a fantastic divorce. Nothing about my divorce was remotely "bad," and there's absolutely nothing for me to feel bad about.

That's not to say that I don't love marriage, or think that it's a waste of time. I know it works for a number of people, and everyone deserves to be happy and in healthy relationships, married or otherwise. But I wasn't happy or in a healthy relationship when I got married for the very first time. Getting divorced wasn't sad or terrible — it was fantastic. In fact, my divorce was one of the the best decisions I have ever made, and one of the best things I have ever done for my children and their future.

But our culture seems to have a love affair with marriage, even when we know that many marriages aren't objectively good. Or healthy. Or happy. Or simply fulfilling. Still, we follow and obsess over celebrity engagements, weddings, and public marriage ups and downs on social media and via reality television. We spend a lot of time and money investing in our weddings, too, spending an average of $33,391 on our nuptials, not including the honeymoon, according to The Knot's national survey of brides. We fawn over marriages that have lasted 40, 50, or 60 years, using these couples as shining examples of real commitment and love.

I, too, bought into this social love affair with all things marriage, hook, line, and sinker. As a result I had a fairy tale wedding to my first husband, and believed that everything was going "according to plan" and relatively perfectly: I had an engagement ring, ceremony, trip to a tropical destination, then we bought a house, and later started planning our family. Every year, on our wedding anniversary, I posted proud declarations of love, basking in our on-going achievement as a married couple. But behind the scenes, the honeymoon was absolutely over.

When I was divorced I was happy, and for the first time in over a decade.

Looking back, I probably should have left my husband years before I did. Our marriage was horrible. Period. I know, now, that I stayed way too long, and that my kids were the reason why I stayed. And, to be honest, I'm ashamed now, because not only did I stay for my kids but I stayed because I couldn't afford to leave. I simply didn't have any other options, so I leaned in and celebrated a marriage that absolutely should have ended years prior. My marriage wasn't some kind of accomplishment. It was a trap.

When I finally left my husband and filed for divorce, few people had positive things to say about my decision and the ramifications that followed. And if people did talk to me about my divorce, those discussions always included the assumption that I was miserable or sad; that I was in mourning; that this was some sort of devastating life change. But being separated felt like freedom. Being a single parent, while difficult, was so much easier than co-parenting with someone who made me incredibly unhappy. Being alone was far, far better than being married.

Being a single parent, while difficult, was so much easier than co-parenting with someone who made me incredibly unhappy.

When I was divorced I was happy, and for the first time in over a decade. And I know that happiness perplexed people who didn't believe it was the "appropriate" response to a disillusion of a marriage. But I was proud of my decision, and my freedom and safety and security and happiness was absolutely worth celebrating. In the end, it took a year and a half to finalize my divorce, and when it was over I absolutely felt like jumping up and down and screaming with glee. My ability to successfully advocate for my kids, my unwillingness to compromise when it wasn't beneficial for me or my children, and my choice to stand up to my ex no matter what were all monumental milestones; moments worth basking in; moments worth being unapologetically proud of.

Divorce is not something to feel embarrassed about, if we value an individual's health, autonomy, and well-being more than we value the institution of marriage.

I wish that we, as a society, provided more support for people when they decide to end their marriages. I wish that our default reaction to the news that someone's marriage has ended wasn't total sadness. I wish that we would consider marriage in a more nuanced way, and, as a result, the dissolution of a marriage in a more nuanced way, so we could make room for people like me: who have horrible marriages and wonderful, happy divorces. Instead of shaming our choices, questioning our judgment, or treating us like we aren't good people or parents because we didn't stay in marriages that were bad, unhealthy, toxic, abusive, or simply unfulfilling, we should be simply asking people how they feel about their divorces and responding accordingly.

Divorce is not something to feel embarrassed about; not if we value an individual's health, autonomy, and wellbeing more than we value the institution of marriage. For me, and so many other people, getting a divorce is so much better than staying married.