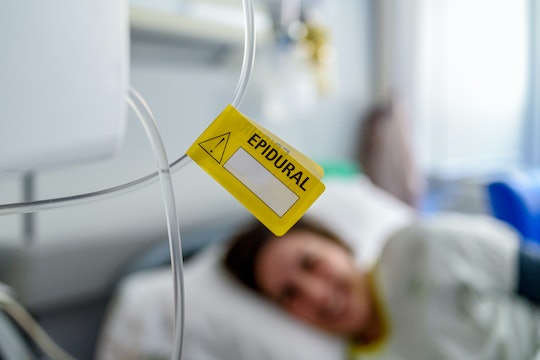 My Epidural Ended A Childhood Friendship

She was the first person, other than my partner and my mother, to know that I was pregnant. She was also a knowledgable doula and a mother to two children, so I had no doubt that my childhood friend would be an incredible source of information, solidarity, and support as I navigated my first pregnancy. Sadly, however, I was wrong. What I thought would be a bonding experience ended up driving a wedge between us, and before I knew it I was having an epidural and distancing myself from a friend I had known since middle school.

I have always believed in a woman's right to choose, whether it be to have an abortion or to schedule a C-section or to go back to work after having a child or to forego having a child at all. And my friend, I'll call her "Kate", did too. As an unapologetic feminist who is often advocating for women's rights and rallying her community to support the latest pro-choice, pro-feminism, pro-women political position or policy, Kate has worked hard to make us all see women as complex human beings who deserve to make their own choices about their own bodies since graduating high school and going through the growing pains we all experience.

So when I found out I was pregnant with twins and, understandably, excited and scared out of my mind, I turned to Kate for help and advice and guidance. I figured there would be no one better to coach me through pregnancy than someone who shared my values, was knowledgable when it came to birth, and was seemingly supportive of all the women in her life. Between her experience as a doula and her feminist stance, I just knew I would receive the support I needed at a time when my life was changing rapidly.

Instead, I felt pressured to make the same decisions Kate had made. She didn't hold space for me to come to my own conclusions but, instead, seemed to grow angry and distant if I didn't follow her specific suggestions. I wanted to follow in her footsteps, too. A medication-free home birth sounded incredible, and was something I was actually looking forward to experiencing. But my body didn't respond to a twin pregnancy the way Kate's body responded to her singleton pregnancies, and when pregnancy complications required me to make different decisions than the ones she had previously made I could feel her growing angry, resentful, and distant.

Our conversations came to an end but the constant pressure and judgment and shame seemed to just be beginning.

When I was 19 weeks pregnant, one of the twins died in the womb; a heartbreaking realization that caused two pre-term labor scares and forever changed my birth plan. My team of doctors told me that my labor and delivery could be more difficult than initially anticipated, because I was now having to birth a baby that was alive and the deceased twin that, well, wasn't. I saw it as my birth team preparing me for the labor ahead, but Kate insisted that my doctors were trying to scare me. Instead of receiving sympathy and support — or, at the very least, understanding for a plan derailing in such a monumental way — Kate promised me that my doctors were wrong. She swore that, as a doula, she knew that my pregnancy complications didn't preclude me from an at-home birth, and that if I really wanted to do what was right for my remaining future child I would stick with my original plan. I wouldn't listen to my doctors. I would do things her way.

And that's when the cracks in our friendship turned into one large fissure neither one of us could avoid. I stopped sharing pregnancy updates with Kate, I stopped letting her know about the details of my new birth plan, and I stopped asking her questions about my pregnant, changing body. As a soon-to-be first-time mom attempting to handle a second-trimester loss and impending motherhood simultaneously, I realized I was happier walking into the unknown without a knowledgable friend than doing the very same with someone who was going to second guess my decisions, pressure me to conform to her way of thinking, and shame me for doing what I believed was best for my body and my future baby.

Soon I was on the receiving end of passive-aggressive, public Facebook posts about the dangers of hospital births, the high rates of C-sections in the United States, and why women shouldn't make labor and delivery decisions based out of fear. Our conversations came to an end but the constant pressure and judgment and shame seemed to just be beginning. I muted her social media accounts, I ignored her posts entirely, and I forced myself to accept the fact that I could no longer turn to Kate for help, empathy, or information.

I guess, in the end, shedding myself of a friendship I once cherished was another pregnancy, labor, and delivery growing pain.

So I wasn't surprised when I had my son, shared my birth story, and Kate could only bring herself to condescend my decisions. After 10 hours of medication-free back labor, I decided to have an epidural so I could rest and regain enough energy to push my son, and the diminished twin, out of my body. I felt obligated to tell these details to Kate; to justify my labor and delivery decisions; to prove I was still a "strong woman" who just needed an epidural to help her birth her son safely. But Kate told me I had put myself and my son in danger, and that the doctors probably gave me pitocin without my knowledge. They didn't, for what it's worth, because I specifically asked my team not to and they respected my wishes without hesitation. But Kate couldn't accept my truth, and continued to promise me that the chances were high I had pitocin and was undoubtably at risk of being wheeled into an operating room at any moment during labor. I was just "lucky" I managed to leave the hospital without a C-section scar.

Kate talked to me as if I was a child, incapable of making my own, informed decisions. She discussed my son's birth as if it was somehow less than; that experiencing labor and delivery in a hospital with the aid of pain medication made my son's entrance into this world less memorable or magical. She talked down to me, as if I was less of a woman or a human being because I didn't have a medication-free home birth and, instead, decided to have a certified doctor put a needle in my back so I could have a birth experience that felt right for me.

A reported six out of every 10 women receive an epidural or spinal anesthesia during labor, according to the Centers for Disease Control and Prevention (CDC). The reasons for choosing and/or having an epidural during labor and delivery are as varied as the women who have them, but one thing is certain: they're common. I chose to have an epidural because I was in severe pain, I was throwing up, I was scared, and I knew those medications were available to me. It was one of the first parenting decisions I made — the choice to take care of myself so that I could bring my son into the world safely — and it's one I'm extremely proud of. I just wish it didn't cost me a friend.

Kate and I are still distant acquaintances, though we do not talk to one another nearly as often as we used to and if we do have a conversation it is shallow at best. I do not share my parenting decisions with her, and now that I'm pregnant with my second child I have not shared any pregnancy updates or choices with her, either. She is no longer a significant part of my life, and I do not play a significant part in hers.

I guess, in the end, shedding myself of a friendship I once cherished was another pregnancy, labor, and delivery growing pain. Because being a woman and having the freedom to choose means having control over every aspect of your life, including who you decide to share that life with. And while Kate didn't respect my choices as a pregnant woman, or a laboring woman, or a woman with a newborn, she has respected my choice to no longer call her a friend. And I guess, when it comes to fighting for every woman's right to make her own decisions, that's a start.

More Like This
Zaya Wade Is Rocking New Long Hair & As Gabrielle Union Put It, She's A "Vision"
How To Tell If Someone Is Lying To You: 34 Signs To Watch For
The Best Couch Sex Positions
What Is RSV?