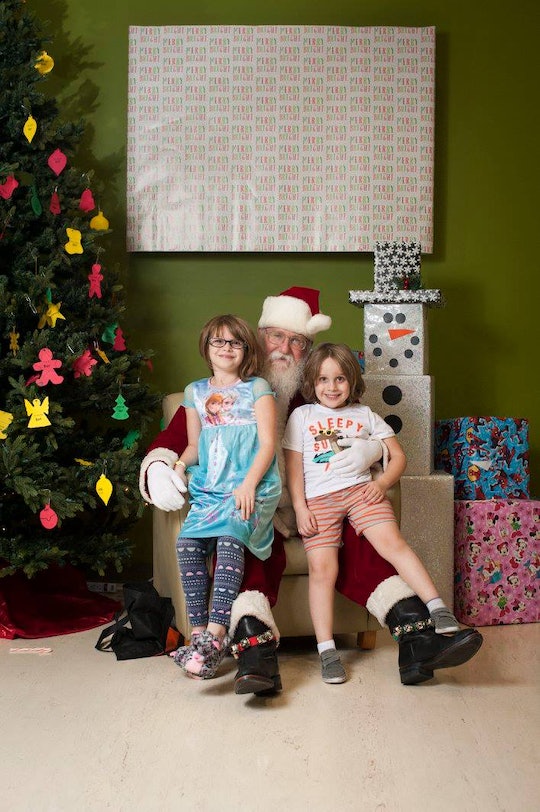 The other morning I heard about a local "pancakes with Santa" event and asked my son if he wanted to go. I mean, who doesn't like pancakes and Santa? But instead of emphatically agreeing to go, he turned to me and said, "Santa? But mom, don't you know that Santa isn't real?" And just like that, my heart broke a little. I had no idea that learning that my 5-year-old doesn't believe in Santa anymore would hit me so hard, but OMG, it totally did.

To be completely honest, I am not really a big fan of Christmas. It's not just the cold weather, relentless commercialism, and the fact that I'm not a Christian that kind of ruins it for me, either. This time of year just hasn't always been the most wonderful time of the year for me. It was right before Christmas a few years ago when I left my husband and became a single mom. That first Christmas was difficult in ways that, to this day, are impossible to articulate, but I did what I could to make it special for my kids, and that included playing up the Santa myth.

When they woke up on Christmas morning to find their stockings full and presents under the tree, I felt more confident in my decision to leave than ever before.

So on that particularly difficult Christmas Eve, we called Santa at the North Pole and watched How the Grinch Stole Christmas with my parents. Then we left Santa a plate of cookies and crawled into the big guest bed together. I read my children Pete the Cat Saves Christmas and felt some peace for the first time since I left their father. When they woke up on Christmas morning to find their stockings full and presents under the tree, I felt more confident in my decision to leave than ever before. It was as if there was still a little magic left in our lives. From that point on, I decided that my kids believing in Santa Claus was awesome.

I have always been of the mindset that childhood should be magical. I truly don't think there's anything wrong about an unyielding belief in Hogwarts and big, friendly giants. While I still hate this time of year for so many reasons, I love the fun parts of Santa's story that inject so much magic into this time of year. Magic only a jolly, friendly person who flies around the world on a sleigh pulled by reindeer and gives presents to everyone could conjure. I don't use Santa to scare my kids or get them to behave, and I don't make my kids sit on Santa's lap if they're frightened. But as long as they want to believe, I want them to be able to.

Now, I knew logically that my kids wouldn't always believe in Santa. I was 7 when my big brother broke the news. And since leaving my former husband, I have remarried and now have a blended family. My step-kids were never taught about Santa, so my husband and I have to tell them more than once that it's not nice to ruin Santa for the other kids. I figured that my kids would learn the truth organically, or would use their own reasoning ability to answer the question, "is Santa Claus real?" all on their own and without an outside influence dictating their beliefs. I just wasn't expecting it to happen so soon.

Mostly, I think I am sad because this marks my 5 year-old growing up, and I am so not ready for him to lose his belief in magic and enthusiasm for Christmas. Before our baby was born earlier this year, he was "the baby," and still wanted me to snuggle him to sleep every night. I have no idea when he's going to stop asking, "Can I have snuggles?" and start saying, "leave me alone." I can't handle that thought, you guys.

Mostly, I think I am sad because this marks my 5 year-old growing up, and I am so not ready for him to lose his belief in magic and enthusiasm for Christmas.

But kids grow up, and eventually the magic of the holidays will be replaced by materialism, day drinking, and drama. It's so depressing. I had almost given up on holiday magic for good, but when I tucked my kids into bed the other night, my son looked up at me and asked, "If we don't get a Christmas tree where will Santa put our presents?" Then I heard a "Yeah?" from his 8-year-old sister in the other room. "We don't want him to skip our house."

So, this might be the last year Santa visits our house on Christmas Eve, and I am totally going to enjoy it while it lasts. I can't stop my kids from growing up or hearing the truth from kids at school, but for now and until they tell me otherwise, Santa is real, Christmas is magic, and I wouldn't have it any other way.