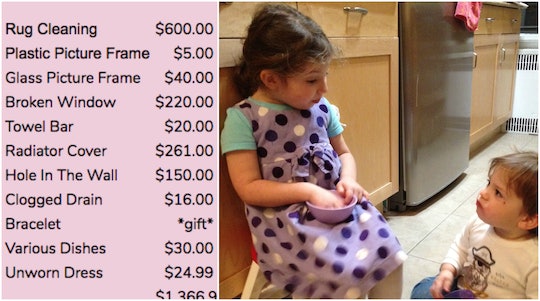 My Kids Have Cost Me $1,366 In Broken Stuff So Far This Year — Here’s The Breakdown

As a mom, I do everything possible to make sure my babies are handled with precious care. My children, however, do not offer me the same courtesy. The tally of stuff my kids have destroyed continues to grow, despite them being 7 and 10 years old. It would actually be quite comical, if it weren’t so damn costly.

I have tried my best to keep precious items out of my kids’ reach. I have always changed out of any dry-clean-only outfits before coming into contact with their adorably pudgy, and grimy, hands. But despite my efforts, much has been ruined, including my hope that I can ever have nice things… or just, basic things… again.

Of course my love for my children surpasses any adoration I might have for an inanimate object, no matter how many generations it had been passed down to me. And no one thing could ever capture the value of parenthood, and all the wisdom I have gleaned from the journey of raising kids.

But I’m allowed to be totally pissed off at what my children have cost me in broken stuff every year. My love for them and my anger at their carelessness are not mutually exclusive.

So how much are we looking at? Let’s run the numbers.

My tween has been on a slime-making kick and does not always remember to follow my strict rule that relegates the stuff to the kitchen. So there is slime caked into my living room rug fibers. It would cost several hundred dollars to remove, which I will, once I get over the sticker shock of this service.

It took me forever to decide what to hang on the bathroom wall. And a day after I did, it promptly fell to the floor and broke, thanks to my son slamming the bathroom door in defiance to having to wash his hands. It’s not so much the cost of the item, but the fact that something I took a painfully long time to accomplish was destroyed in a second due to my insistence that he use soap.

The breaking of this item was especially egregious, as it happened on Grandma’s watch. So that whole “don’t play ball in the house rule” only applied to my parents’ home, and not mine, apparently.

My son broke a window in his room when he kicked a soccer ball, from the inside. Thankfully we just had to have the glazier replace a panel of glass and not the entire window pane. I am also thankful no one was hurt.

This needed to be replaced when it was used as playground equipment. It will only be a matter of time before the couch, a side table, and a very-fun-to-play-with broom will fall prey to the same circumstances.

It’s thoroughly bashed in but still kind of functional, so we’re holding out replacing this thing until it truly falls apart and no amount of duct tape can keep it together any longer.

This dent was created during my son’s tantrum, where his vigorous kicking caused his heel to go through a wall. We had to plaster and paint at least a four by four section of the wall by my 7-year-old’s bed. And since we’re not handy at all, we had to hire someone to do that. So while that cost sounds high, it covers supplies, manual labor, and the emotional labor of working through my parenting pitfalls that led my son to acting out in the first place.

We have spent that much in Drano so far. My daughter refuses to cut her hair. She also refuses to clean the drain. I may shave her head if she doesn’t start taking responsibility for her Rapunzel-like tresses.

To be clear, I was the one who broke this stuff. My kids are pretty careful when handling glasses. But I am so sleep-deprived and my mind is scattered across the demands of my job and my family and myself, that I get the dropsies.

My daughter got so excited to receive a certain dress, that she ripped the tags off before trying it on and — guess what — it doesn’t fit. We can’t return it because it was final sale, so now we will donate a brand new dress to someone smaller and spend $24.99 again to purchase a dress in a larger size, and she will probably outgrow it after one use.

RIP to the “namaste” bracelet given to me by my BFF when I was going through a dark time. My son managed to rip it off when he was pulling me into his room to play a board game. There went my reminder to stay calm through tough times.

If we overlook the fact that I am emotionally bankrupt at times, due to the relentless, and mostly unintentional, destruction my children enact within our home, I am out $1,366.99 so far this year — that's about $5,464 per year in "I'm sorry-ies!", if that figure remains constant over each quarter.

I’m sure writing tuition checks to college will end up costing more, in actual dollars, but will probably leave a lot less collateral damage in its wake.

Still, I have to consider how much I’ve surprisingly saved by having kids. Since I’m perpetually tired, I don’t stay out late, and I actually rarely go out. Pouring myself a drink at home is a lot cheaper than ordering one at a bar. While I do fantasize about what I’d do with the money we are currently socking away in 529 college saving funds for our kids, it’s not like I’m that bummed out about it. If anything, my kids are teaching me that materialism is, not only a waste of money, but a waste of energy. If I free myself from the worry of keeping my dining room table free of water stains and wayward marker streaks, I have more to give to other aspects of my life… such as fixing the bathroom door lock, which I’m sure they broke on purpose so I can’t hide from them.