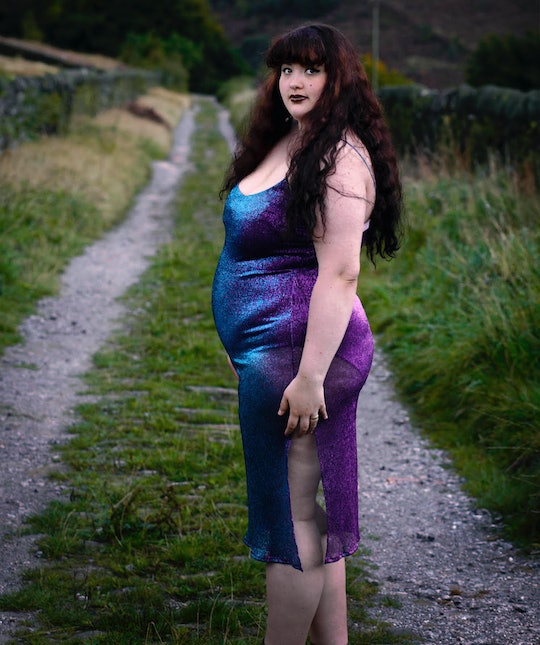 My Postpartum Resolution Isn't "Lose Weight," It's Something Harder & Better

The first month of the year is often a difficult time for me. Like many people, I reign in the New Year with resolutions and aspirations. Far too often, I also set unrealistic goals for myself — things like "become a professional burlesque dancer" or "save enough money to tour New Zealand for three months." By mid-January, it's typically become clear that I should've just resolved to floss.

In 2017, 'exercise more' and 'lose weight' were the most popular New Year's resolutions made in Britain, where I live.

Dreams of dancing and international travel aside, I have also dedicated many New Year's resolutions to changing my body. For years, losing weight was just about the only "achievement" I wanted to pursue. It's not especially surprising, considering that in 2017 "exercise more" and "lose weight" were the most popular New Year's resolutions made in Britain, where I live, according to market research company ComRes.

As the mother of a 1-year-old, I know what my 2018 resolution was supposed to be. Now that my daughter is slightly more self-sufficient and partially weaned off breastmilk, I should have more time to hit the gym. I should invest my cash in cellulite and stretch mark treatments. I should do whatever exercises I can to re-lift my boobies — and if that doesn't work, I should save some dollars for plastic surgery that'll do it for me. I should shrink.

Thanks to years of immersion in feminist, body-positive activism, I haven't necessarily struggled to feel attractive or worthy of self-respect.

Postpartum body- and fitness-related advice is pervasive. Listicles on "the best weight loss advice for new moms" are everywhere, and most of the first-time mothers I've known have gone on a weight-loss plan practically as soon as the babies were out of their bodies. While I understand the pressure, my new-mom resolution wasn't to lose weight. I'm aspiring to something a little different: Something that doesn't involve altering my body, but appreciating what the changes it's been through actually mean.

Let me first admit that I'd be lying if I said I haven't struggled to exist in my postpartum figure since giving birth. Thanks to years of immersion in feminist, body-positive activism, I haven't necessarily struggled to feel attractive or worthy of self-respect. Rather, it's just taken some time for me to feel "at home" in my new self.

There's a disconnect between the body and the person that I believe can arrive from endless lack of sleep and physical exhaustion. It's true that my face looks more tired than ever before, my belly is covered in stretch marks that I didn't used to have, and the feeling that I'm getting older permeates my bones in the form of myriad aches and pains. I know that none of these developments are "flaws," though. I know that bodies change, grow, and scar with the marks of a life being lived — and that's actually a really cool thing.

I begin to feel as if the changes in my body that have resulted from carrying a child, and having that child, are directly responsible for any hardships I encounter as a new parent.

The disconnect, on the other hand, has led to much self-criticism and self-doubt. I think of the tiredness and lack of drive I so often experience these days, and I all too often blame myself. I begin to feel as though my body is failing me. I then begin to feel as if the changes in my body that have resulted from carrying a child, and having that child, are directly responsible for any hardships I encounter as a new parent.

The truth is, I believe mothers are goddamn superheroes.

Once in a while, however, I experience brief moments of clarity. When my stress migraines stop, when my daughter sleeps for at least four consecutive hours, or when I manage to have some me-time, I remember what all of the changes in my body (both internal and external) actually signify.

The truth is, I believe mothers are goddamn superheroes. It isn't just the fact that pregnancy is jam-packed with back aches, vomiting, severe headaches, and insomnia, or that childbirth is one of the most painful things a human being can experience (although props to all mothers for getting through that hell). It's that raising a child from the ground up is hard f*cking work.

When compared to other primates, human newborns are the most helpless at birth. Our brains are underdeveloped in order for our heads to fit through the narrow passageway that is the birth canal. When babies are born, they cannot do anything for themselves. They can't feed themselves. They can barely move. They certainly cannot speak or understand verbal communication. We literally have to teach them everything — and do every single minute thing for them until they are cognitive and capable.

It's a full-time job — and as with any full time job that wears one out, it's bound to have repercussions. The bags under my eyes, the coarseness of my skin (which is rarely moisturized or nourished), and the belly that wobbles more than ever before because I haven't had the time nor desire to "repair" my pregnancy body, are all simply signs of the monumental task I've taken on.

They are also signs of the monumental gift I've been given. I would never pretend that motherhood is blissful; that I don't often find myself missing the person I was — or lifestyle I led — before an 18-pound mini-me followed me around everywhere. Despite my infinite grievances, however, I wouldn't change a single thing.

Seeing this little human grow from scratch has been the most fulfilling job of my life. Carrying her, delivering her, and watching as her personality has developed has brought me joy, pleasure, and a sense of absolute wonderment.

When I put aside all temporary frustrations, pains, and exhaustions, and allow myself to be consumed by those feelings instead (which can admittedly be hard AF to do when I'm going on two hours of sleep in four days), I cannot help but feel similar wonderment towards my body. I cannot help but resolve to treat it with empathy, with kindness, and with enormous respect. It isn't something I need to shrink in order to celebrate. It's already worthy of praise and care, and I'm resolving to treat it as such moving forward.