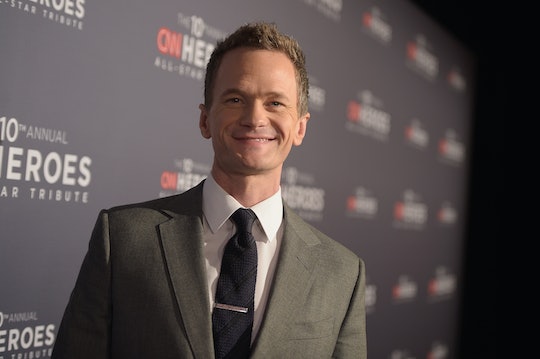 When it comes to Halloween, there are couples' costumes, group costumes, and even family costumes — and then there's Neil Patrick Harris. Seriously, the 44-year-old A Series of Unfortunate Events actor and his partner, chef David Burtka, are the absolute masters of Halloween costumes for their family. On Tuesday, Neil Patrick Harris revealed his family Halloween costume and it's basically his family's best one yet. This year's theme, according to Harris' Instagram post is the "Burtka-Harris Halloween Carnival of Curiosities" — and their Halloween family photo is truly spooky.

Earlier in October, it appears that Harris may have been dropping hints on his Instagram account, as he began posting circus-themed photos from the set of A Series of Unfortunate Events. The Netflix original series is currently filming the ninth book, The Carnivorous Carnival, for its third season. Harris also shared a photo with the cast of Cirque du Soleil's Kurios on Monday, as well as another photo outside a terrifying-looking funhouse at the Pacific National Exhibition Fright Nights in Vancouver, Canada. Clearly, Harris and Burtka have had creepy circus on the brain, because their family costume this year is beyond Halloween costume goals. Also, can we talk about how their Halloween family costume photo has seriously gone up in production value for this year? The Harris-Burtka family Halloween costume has obviously become legit now.

"Hurry, hurry!" Harris beckons in his Instagram caption. "Step right up and behold the Burtka-Harris Halloween Carnival of Curiosities." Harris himself is dressed up as a crazed circus ringleader, complete with crazy eyes. Husband Burtka seems to be drawing Halloween inspo from both American Horror Story's Twisty the Clown and just a touch of Pennywise from IT. Their two children, 7-year-old twins Gideon Scott and Harper Grace, are dressed up as attractions from their spooky circus sideshow: Gideon is dressed up as a strongman while Harper is dressed up as a bearded lady. The effect of seeing all four of them together is pretty incredible, especially when posing against a circus tent background that looks like it could have been from the set of Unfortunate Events.

Halloween is a pretty big deal for Harris and Burtka. Finding out what Neil Patrick Harris' family Halloween costumes are has basically become an annual tradition for fans. It all started when the twins were just 1 year old, when Harris and Burtka had a Peter Pan-themed family costume, complete with Harris as Captain Hook, Burtka as Peter Pan, Harper as Tinkerbell, and Gideon as John Darling. The following year, they all went as characters from the Wizard of Oz, with Harper as Dorothy, obviously. In 2013, they had not one but two Halloween family costumes: one for preschool — Alice in Wonderland — and another for trick or treating — classic movie monsters.

There's no denying Neil Patrick Harris has a flare for the dramatic, and his family's Halloween theme game is seriously on point. For example, their retro-inspired Batman family costume from 2014: I love Harper's bad*ass Batgirl pose.

In 2015, they went as Star Wars for their family Halloween costume. Gideon and Harper went as Luke and Leia, but Burtka's Han Solo and Harris' Obi Wan Kenobi were pretty impressive, too.

Their 2017 Halloween family costume definitely ramps up their costume game to a whole new level: Those costumes look legit like something from the dressing rooms of a professional theater or high-end period movie. Neil Patrick Harris, I bow to your Halloween costume genius and I know fans already can't wait to see what trick — or treat — you've got up your sleeve for next year's costumes.