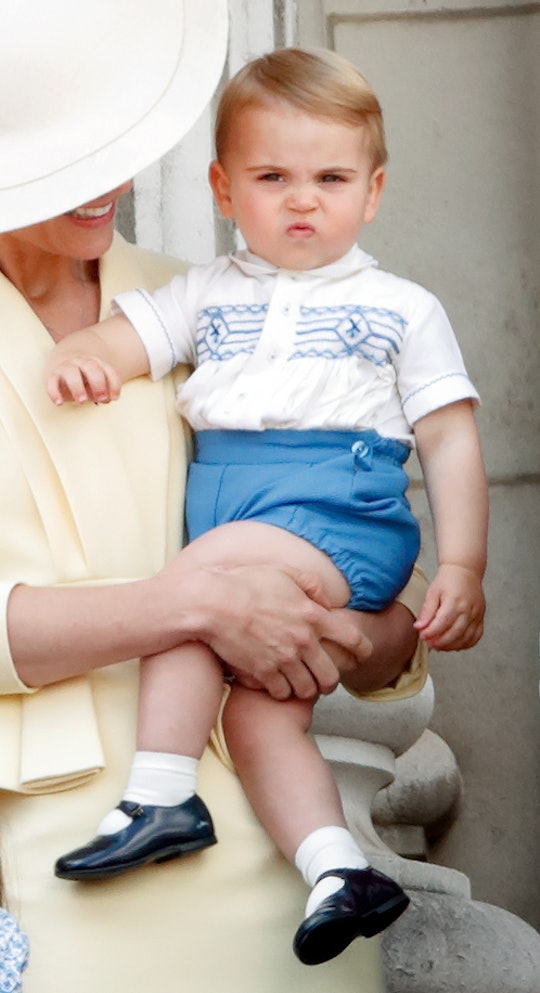 Princess Charlotte's adorable features are often compared to Queen Elizabeth and photos of Prince George are regularly put next to their dad Prince William to highlight their similarities. And, wouldn't you know it, but those royal genes are strong because a new, never-before-seen photo of Prince Louis may have you thinking the 2-year-old Cambridge tot just might be his older brother's twin.

The Duke and Duchess of Cambridge recently sent out thank you cards, a copy of which was shared on the Instagram page @KatsRoyalLetters, to people who had been kind enough to offer birthday wishes to Prince Louis when he turned 2 on April 23. "The Duke and Duchess of Cambridge appreciated your kind thought in writing to Prince Louis as you did on the occasion of his second birthday," the card read. "This was greatly appreciated by Their Royal Highnesses who send their best wishes."

Back in April, in honor of their youngest's birthday, Prince William and Kate Middleton shared an adorable "Instagram vs. Reality" set of photos featuring Prince Louis playing with some finger paints — one of Prince Louis looking neat and tidy with his painted hands and the other with paint all over his face and laughing.

In this previously unseen photo the young prince, he's standing smiling nicely for the camera in a little checkered shirt, which looks like the same shirt he wore for the official photos his mom took on his birthday in April. And in this photo, he looks a whole lot like his 7-year-old brother Prince George did when he was the same age.

There are a few differences between the brothers, of course. Prince Louis has darker hair and eyes like his mom while Prince George was blonde much like his dad, Prince William, was at the same age. And certainly their 5-year-old sister Princess Charlotte has some similarities to both of her brothers as well. But Prince George and Prince Louis with those cheeks and their perfect little haircuts? Basically twins.

Of course, that's not to say their personalities are the same. Middleton has spoken in the past about Prince Louis' inquisitive personality, saying in an April Zoom interview with the BBC, "It gets a bit hectic, I am not going to lie, with a 2-year-old." Prince William added that his youngest son was making Zoom visits with family members a bit of a challenge since he kept ending the calls. "For some reason he sees the red button and he always wants to press the red button," he told the news outlet.

It sounds as though Prince Louis has settled into his rightful place as mischievous youngest child, while Prince George is perhaps the cool older brother. Hard to know for sure, of course, but all I know is that they're looking quite similar these days.