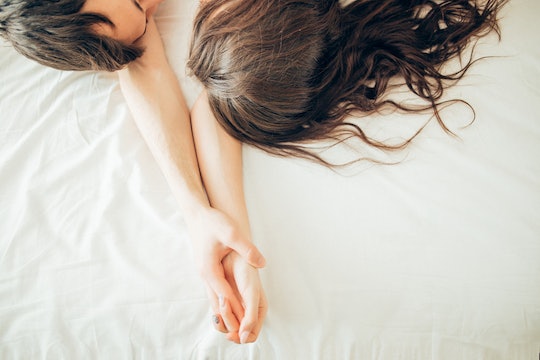 Women Have These Misconceptions About Having Sex After Childbirth, New Study Shows

There's so much to worry about as a new parent, and unfortunately, having sex after giving birth is definitely one of them for new moms. And as new report has found, women aren't informed about sex after giving birth and get mixed messages from their doctors and the media, which means that they enter into being a new mom without all the information they need to feel good about getting back in the sack with their partner when they're ready to.

The study also found that the women had misconceptions about different birthing methods and what they did to their bodies. Drs. Caroline Pukall and Jaclyn Cappell of Queen’s University in Ontario, Canada surveyed over 1,400 women who had never been pregnant but were interested in having kids, according to Reuters. The researchers, who published their study in the journal Birth, wanted to know how women viewed birth and their sexuality, so they asked the participants about their preferences for delivery, what they thought about sex after childbirth, and the kinds of things they already knew from friends, family, and the media. The results were pretty shocking.

On the other side of things, 21 percent of the women assumed that a C-section would prevent any of those future sex problems. Interestingly enough, the women who felt this way did so only because they were more likely to say that reality shows and the internet were "influential" sources of info, according to Reuters.

Those who disagreed that a C-section would prevent future sex problems were also more likely to rate health care professionals as their main source of information. Women who preferred a C-section were also more afraid of giving birth overall, according to the study.

"Understanding childbirth from the viewpoint of a future generation of potential child bearers can help create current, relevant conversations and appropriate reproductive health education content," Pukall said in a statement accompanying the study in Birth.

Views varied from country to country, too. Women in the United States, the United Kingdom, and Australia were more likely to prefer a C-section in the name of a "better" sex life postpartum as opposed to other regions of the world.

It also means that as a culture we could do better when it comes to informing women about what really happens during childbirth and how it affects their bodies when it comes to sex. According to Dr. Kathrin Stoll of the University of British Columbia in Vancouver, Canada, who wasn't involved with this study but published a similar paper in Reproductive Health, told Reuters that it comes down to education. And if the info comes from family and friends, it's a lot less scary.

"We should be providing women and men with information about childbirth early on, as early as elementary or secondary school, before their attitudes towards birth become too influenced by media dramatizations and other sources that aren't evidence-based," Stoll said in a press release for her study, according to Eureka Alert.

For example, instead of using way too real videos in school or avoiding the conversation altogether, a German program invites midwives to classrooms to talk about their jobs and how babies are made and birthed, especially showing off how the babies move through the birth canal and pelvis. Because it doesn't matter how you have a baby — your vagina will always be beautiful and ready for sex after a woman has kids.

According to the National Institutes of Health, there's no difference in postpartum sex whether one has a C-section or a vaginal birth, but the NIH does recommend better prenatal sex ed to ensure better sex throughout and after pregnancy. The more we inform women about what happens to their bodies, the better. With all of the resources and technology available to spread the word, there's no reason so many women go through life being afraid of childbirth or postpartum sex.