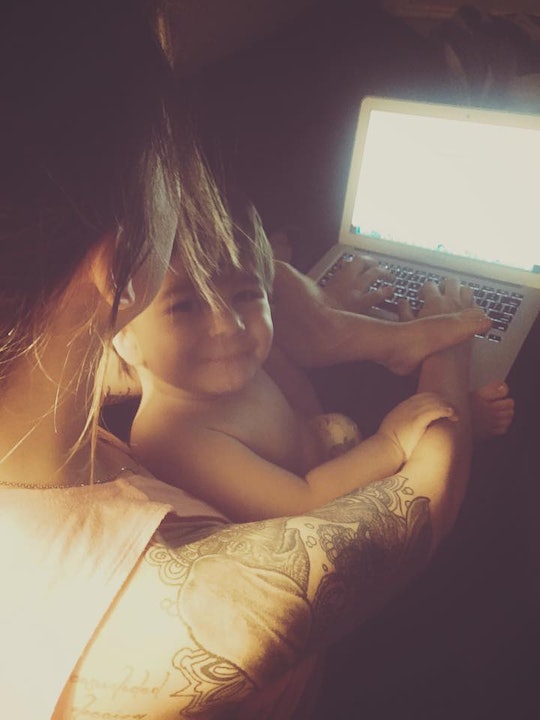 An Open Letter To Every Hot Mess Mom

I see you everywhere, because you're also me.

I don't want you to buy into the idea that not being 'perfect,' somehow means you're failing.

I remember feeling this silent but palpable cloud of overwhelming expectation wash over me the moment my son was born. As he was laid in my arms, just a few seconds old, I started making a mental list of all the things I wanted to be for him, only to realize that I would never be capable of being all of those things simultaneously and flawlessly and effortlessly. Still, that realization didn't stop me from trying. The first few months of my postpartum life were filled with disappointment, because I was trying to be this "picture perfect" mom peddled to us all by way of television shows and gender stereotypes and filtered Facebook posts. I wanted to be absolutely everything my son needed; someone who didn't make a mistake and didn't second guess herself and had time to make organic, balanced meals from scratch while simultaneously working a full-time job and breastfeeding exclusively and staying involved in her friends' lives and cultivating a romantic relationship and mastering the latest do-it-yourself project.

I, of course, failed, and rather spectacularly. The harder I tried to keep myself from making mistakes, the more mistakes I made. The more I attempted to accomplish just so I could prove I could "do it all," the less I actually accomplished. I realized early on that if my choice was between being a "perfect mom," or being a "hot mess mom," a hot mess mom I would be.

I see you everywhere, because you're also me.

Which is why I'm writing this love letter to you, fellow hot mess moms the world over. Because when I see you hurrying to that late appointment or spilling that coffee or searching for that snack we both know you forgot to pack, I need you to know that you're alone. I don't want you to think that you need to hide your flaws or try to cover up the mistakes you're making — both publicly and privately. I don't want you to buy into the idea that not being "perfect," somehow means you're failing. You might be categorized as a "hot mess," but all you're really doing is simply existing as a human being. You're doing what literally every single solitary parent has done since the beginning of parenthood. You're trying and you're sometimes succeeding but you're also falling short and you're continuing to try even when it feels like a futile endeavor because, well, parenthood is worth it.

I don't want you to think that the somewhat judgmental stares or openly shaming comments you've (probably) received, are indicitive of how well you're doing at this whole parenting thing. In fact, for every raise eyebrow or subtle head shake, there are more moms silently telling themselves, "Oh, thank you. I was hoping I wasn't alone." You're reminding us all that perfection is an illusion and having your life completely together, 100 percent of the time, is as overrated as it is impossible. You're giving your fellow moms the silent permission to not only be themselves, but to own their mistakes and their flaws and wear their less-than-perfect parenting styles on their stained sleeves, like the badges of honor they are.

You're reminding us all that perfection is an illusion and having your life completely together, 100 percent of the time, is as overrated as it is impossible.

So thank you, hot mess moms. While I am the perfect person to be my son's mom, you're reminding me that I'm not the only mom in the world that isn't perfect. When you are running late or tripping over yourself or struggling to calm down your tantrum-throwing toddler, you're also giving me this invisible pat on the back and a much-needed supportive hug. You're doing all of us moms a favor and combating the unrealistic idea that we have to always be right and always know what to do and always love every single part of parenting and never ever make a mistake and never ever look frustrated or stressed or unhappy.

You're giving moms perspective. You're giving moms the solidarity they definitely need and deserve. And you're reminding me that when I'm wearing a stained shirt and 3-day-old yoga pants and a messy bun because I haven't had a chance to wash my hair in over a week, hurrying to an appointment I'm already an hour late for and calling the receptionist while simultaneously dropping the baby bag and holding my toddler by his tiny, trusting hand; I'm not alone. Thank you.

More Like This
Ginger Zee Had A Perfect Response After A Troll Asked Her "Who's Raising Your Kids?"
It's A Beautiful Day In Jenny Slate’s Neighborhood
35 Relatable Quotes That Prove Being A Mom Isn’t Easy
Meet Your New Favorite Blazer(s)