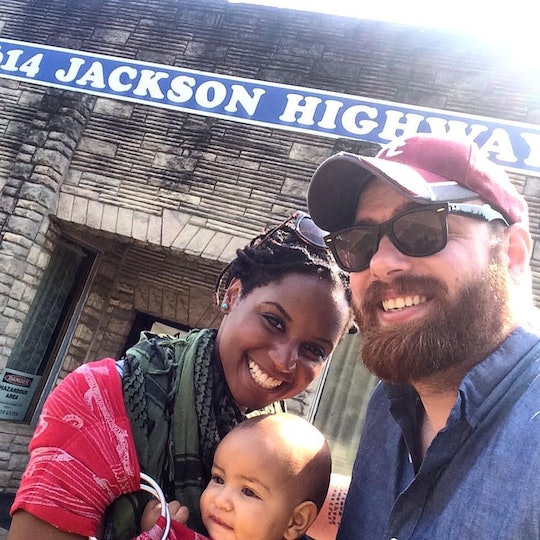 How Motherhood Helped Me Own My Queerness

I had some early clues about my sexual orientation as a kid, but it wasn’t until pregnancy and motherhood that I fully wrapped my mind around my queerness and its meaning. You probably wouldn't guess it to look at me in the context of my family; I'm mostly femme and married to a cisgender man, and strangers are usually too preoccupied with figuring out how a Black woman from New Jersey ended up with a white guy from Alabama to consider the even stealthier ways we challenge conventional social norms.

This has been just one of the many unexpected things I love most about motherhood: how the rigors of parenthood have helped me uncover and embrace aspects of myself, many of which aren’t necessarily about my kids, even as they expand my capacity to love and accept them.

Motherhood helped me rediscover that I am attracted to people of all genders, inviting me to finally own this core part of my identity that I had been programmed by various constructed messages to ignore.

Why did it take me so long to claim this part of myself? There have always been gay, lesbian, and bisexual people in my life, and I’ve mostly spent time in places and spaces that profess acceptance of queer people — and more belatedly, transgender and nonbinary people.

But what people say about acceptance doesn't always match with their behavior. And when I was younger, actions spoke louder than any occasional Seinfeldian “…not that there’s anything wrong with that!” The messaging included a relentless drumbeat proclaiming heterosexuality as the default from which anyone else deviates, occasionally at the risk of ostracization, violence, or death.

Expressions of disgust over same-gender attraction were common, even among family and friends with openly gay and lesbian people in their lives, which only amplified the more casual heterosexism I witnessed. Like the administrative forms that always had spaces for a "mother" and "father," both presumed to be present and partnered. Or the presumptuous exhortations from my parents and teachers to focus on “books, not boys” — supportive messages that, like so many gifts in our society, arrived in needlessly gendered packages. Or the jokes about what my “poor” father would do about boys dating his long-legged daughters, which usually resulted in chuckles about the Louisville Slugger resting in our front closet even though none of us play baseball. To say nothing of the endless “boy-meets-girl” media storylines presented as the path to a fulfilling life.

Numbing myself kept me on heteronormative autopilot at parties, happy hours, and relationships.

Disney movies back then were especially unnerving; I eventually avoided them altogether. As a Black girl, every storyline featured something that made me uneasy, like the creepy relationship dynamics in Beauty and the Beast, or the way stronger accents and darker skin correlated with a character’s “badness” in Aladdin. In The Little Mermaid, it was clear from the other girls’ responses that I “should” have been invested in whatever was going on between Ariel and Eric. But I was totally bored until Ursula entered the picture, and then uncomfortably confused upon realizing that something about her made me feel the same tingly feeling I felt whenever I heard Michael McCrary’s bass on Cooleyhighharmony.

As a perceptive cisgender girl who felt attraction to guys, I quietly learned to reflexively re-narrate inklings of attraction that didn’t involve men. “Ooh, she’s really cute…” I’d think, then immediately explain it away: “I must really like her style.” “Her hugs make me feel all warm inside. Eh, it’s late summer, everything’s warm.” “Whoa, they look super sexy wailing on those drums! Well, every drummer’s at least a little hot.”

Eventually, “working hard” with books was joined by and “playing hard” with booze through my late teens and 20s, which conveniently muffled that internal questioning altogether. Numbing myself kept me on heteronormative autopilot at parties, happy hours, and relationships. The more I reinforced those patterns, the harder it became for me to see or break them, or for anyone who wasn't a straight, cisgender man to feel safe or confident enough to approach me.

I started noticing things I hadn’t really let myself see before, like how gorgeous most women are whether or not I “like their style.” And how warm certain people’s hugs make me feel, even in the dead of winter.

Motherhood interrupted that for me.

Pregnancy and childbirth pulled me out of habitual numbing, and drew me into community with kickass midwives, doulas, and mamas who helped me heal the feminine body shame I didn’t even realize I was carrying. Experiencing and recovering from a troubled first pregnancy, along with the fatigue I experienced in both of my pregnancies meant I spent more time resting than I had in years.

And like most pregnant folks, I also stopped drinking.

Similar to what many people experience in recovery, sobriety and slowness gave me space to really see myself, while helping me be more fully present with other people.I started noticing things I hadn’t really let myself see before, like how gorgeous most women are whether or not I “like their style.” And how warm certain people’s hugs make me feel, even in the dead of winter. And how that spark I feel when I notice a passion or talent someone has — whatever "thing" lights them up and illuminates their sexiest features — feels the same for me regardless of that person’s gender.

Savoring the freedom of real belonging versus merely “fitting in” is something to celebrate, and it’s a lesson I hope our kids learn far earlier in life than I did.

Outwardly, not much has changed about my day-to-day life. I’m still in a loving, satisfying partnership with my current husband, and our relationship is sturdy and expansive enough to hold space for all of me. Though part of me will always mourn what I missed out on by not honoring this aspect of myself sooner, I’ll always be grateful that becoming a mom helped me find the rest of me when it did. Getting to know my whole self makes me a more content and joyful person, which also happens to make me a better parent.

For example, while I’m sure I already have and will continue to (mostly unintentionally) embarrass our kids in a variety of ways, I definitely won’t be doing so by venting unchecked body shame. But I will continue challenging people who project heterosexist assumptions onto them. And if and when the things they come to know about their own gender and sexuality defy the cishet norm and/or fluctuate over time, I won’t be rattled or dismissive because my own experiences have deepened my empathy and broadened my understanding of "normal."

This Pride month, I’m feeling proud to know and love all of myself. I’m proud of doing the work to reclaim the full truth who I am beneath the lies and limits white supremacist patriarchy imposes on all of us, even those of us who have the privilege that comes with being able to “pass” in one way or another. Savoring the freedom of real belonging versus merely “fitting in” is something to celebrate, and it’s a lesson I hope our kids learn far earlier in life than I did.