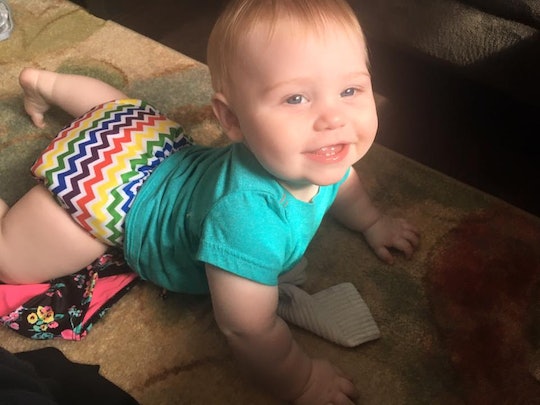 Heads Up, Babies Don't Have Genders — So Let's Stop Making A Big Deal About It

In my experience, when people see a baby for the first time, they usually say something like, "What a beautiful baby. Is it a boy or a girl?" Or if you dress your baby in a stereotypically "boy" or "girl" color, they might say, "What a pretty girl," or, "What a big boy." Honestly, I find these encounters odd and a little bizarre. I mean, are we going to treat babies differently once we know their assigned gender? If so, that's pretty messed up. Plus, babies don't have gender, so these questions are as useless as they are odd. That's why I've stopped telling people my baby's "gender," and correcting and/or affirming them when they guess. In the end, it just doesn't matter to me.

Now, before you roll your eyes, you should know that I am not suggesting that we immediately stop assigning sex at birth. That kind of social, cultural, and political shift isn't going to happen, at least not overnight, and for many families I know that assigning a sex and/or preparing for one helps them parent to the best of their abilities. I don't have any agenda beyond wanting my kids to be happy and healthy. But lately I’ve started to explore different gender expression and seriously question the importance of gender and gender roles in my life, my family, and our society as a whole.

You might disagree (and that's totally OK), but I think we can and perhaps should stop making such a big deal about whether or not people consider our babies to be "girl" babies or "boy" babies. Why do we care if a baby with a vulva likes toy trucks, or a baby with a penis wears pink pajamas? And if we hope to achieve a world where everyone is treated equally, we should probably stop treating children differently based on their presumed gender.

If you ask me if they are a boy or a girl, I might reply, 'We don't know yet,' or simply side-step the question and tell you their name.

So, before we go much further, we should probably see what science has to say about gender. According to the American Academy of Pediatrics, babies and young toddlers don't really "get" gender right away. Rather, they develop an understanding of gender over time. They begin labeling gender at 18 - 24 months-old, recognize gender and sex differences between 2 - 4 years old, and declare a gender identity around 5 - 6 years of age. Until then, it's completely normal for a child to explore gender in their dress, roles, play, or pronouns. And once they declare an identity, there's always a chance that their declaration may not be what you expect.

According to Genderspectrum.org, gender is a lot more complex than a binary established between males and females. First, you have assigned gender, or the label you are assigned at birth. Then you have gender identity, which is your internal idea of your gender. You also have a gender expression, which is how you share your gender with the world. Your assigned gender might be the same as your gender identity (cisgender) or entirely different (transgender). You also might identify as agender, non-binary, genderfluid, or any number of different labels or identities. So, yeah, gender is anything but simple.

As parents, we play an important part in letting our kids figure out where they belong on the gender spectrum, and without imposing harmful gender roles on them in the process.

So, what about biological sex? While most of us were taught that anatomy, XY/XX chromosomes and/or hormones determine your biological sex, scientists are discovering that it's not so simple, either. According to an article published in the journal Nature, as many as 1 in 100 people has a condition where their chromosomes and anatomy don't entirely match when it comes to sex. In fact, advances in our understanding of cell biology actually show that pretty much everyone is made up of a unique "patchwork of cells" in terms of sex. Science is so cool, you guys.

So, if babies don't have a gender identity, why do we treat them like they do? A recent BBC experiment showed that people unconsciously treat babies differently based on their gender — giving girls dolls and calling them pretty, and giving boys toys that foster spatial ability. It's seems like no big deal, but playing with these kinds of toys is important for brain development, so when we limit our daughters to dolls this might be unintentionally setting girls back developmentally, and that is not OK.

Gender is a social construct. As parents, we play an important part in letting our kids figure out where they belong on the gender spectrum, and without imposing harmful gender roles on them in the process. And what happens if your child's gender identity doesn't match up with their assigned gender? According to Robert Garofalo, MD, MPH, Division Head of Adolescent Medicine and Co-Director of the Gender and Sex Development Program at Lurie Children’s Hospital of Chicago, kids who feel pressured to conform to a gender identity that's not their own are at increased risk for a whole host of negative outcomes including, depression, incarceration, homelessness, and suicide: the very things we aim to protect our children from.

And truly, as parents, isn't that our job? To unconditionally love our kids, from the day they come into our lives until the day we forever leave theirs?

So, for now I've decided to stop assigning gender to my baby. If you ask me if they are a boy or a girl, I might reply, "We don't know yet," or simply side-step the question and tell you their name. But I won't say anything to people who say, "What a pretty little girl," when they see a baby in pink pajamas. I, for one, think being a girl is awesome, and frankly, it doesn't matter what gender someone assumes my child has. Again, babies don't have gender.

When the day comes, and my child tells me about their gender identity, I plan on following expert advice instead of holding my child to whatever preconceived notions I may have. As Garofalo explains in a presentation to the American Academy of Pediatrics, the best way to approach gender identity with your child is an "affirming approach" —letting them tell you what choice they've made, then supporting that choice wholeheartedly.

And truly, as parents, isn't that our job? To unconditionally love our kids, from the day they come into our lives until the day we forever leave theirs? For me, that's absolutely my job, and that means giving my child the freedom to exist outside of the constructs of gender. So boy or girl? Eh, it doesn't matter. That's my baby.