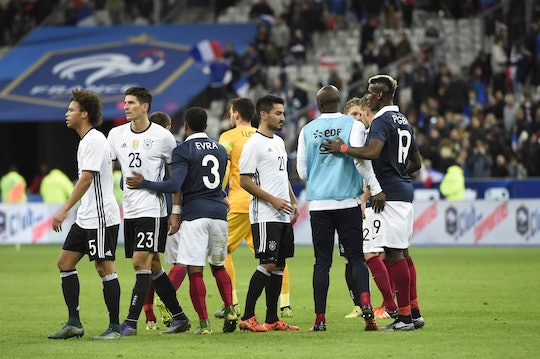 EARLIER: Details are still unfolding when it comes to the Paris attacks, which have left a reported over 120 people dead following at least six shootings, three explosions, and a hostage situation in Paris. But little by little, reports about what's happening on the grounds in the city are coming out, and one Vine claims to feature one of the explosions outside the Stade De France.

On Friday, France and Germany faced off in the Stade De France for a friendly match. French President François Hollande, who was watching the match, was evacuated from the stadium following reports of the explosions and shootings. (It's unclear if the incidents are linked at this time.) But those of us who are watching the tragic event unfold on our Twitter feeds have had no idea what it's like in Paris, or inside the Stade de France, right now. This Vine, however, appears to give us a glimpse inside. And the results are incredibly haunting.

Watch the Vine that purports to capture the moment that one blast occurred outside the stadium:

So far, no information has been released about the identity of those responsible for the shootings, the explosion, and the hostage situation at Bataclan, where 80 people were killed, according to reports.