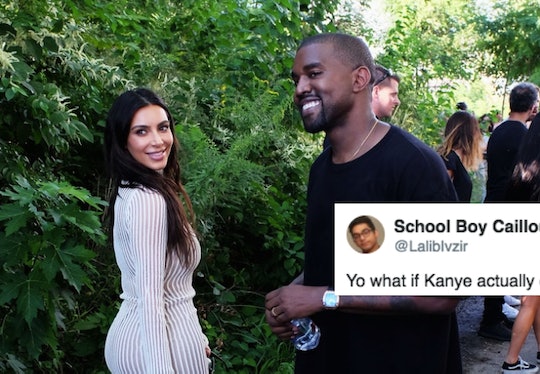 People Are Making Awful Accusations About Kim & Kanye After Welcoming Baby No. 3

On Tuesday morning, Kim Kardashian and Kanye West announced the birth of their third child. But because reality stars are apparently not allowed to have nice things, trolls who live in the deep dark corners of the internet immediately came out on social media to gossip about the baby. In addition to theorizing that Kylie Jenner was the surrogate, now people are accusing Kanye of cheating on Kim and speculating that the baby is the result of the affair. Which is all totally ridiculous, but also a really mean thing to even think. Romper's request for comment from reps for both Kardashian and West regarding these comments on social media were not immediately returned.

One person on Twitter wrote, "Yo what if Kanye actually cheated on Kim but Kim was like NAH and bought that MF baby like yeet," which not only makes a judgement about their marriage, but also turns Kim into some evil overlord, just "buying" children from other women.

Another person echoed the sentiment, tweeting, "I just peeped that... so the real thing is Kanye cheated on her and Kim decided to just call the lady a surrogate cause she already 2 kids deep with Kanye... makes much more sense."

Really, does it actually make more sense? Because hiring a surrogate to have another baby because you had complicated and dangerous pregnancies in the past, but also want a huge family, just like the one you came from... that sort of makes a lot more sense than some shady weird "baby buying." It's insulting to both women and Kanye.

This Theory Is Truly Absurd

No wonder the world is in such dire straits — people can sink really low on social media when they don't have to say anything to a person's face. Although that doesn't mean that the rumors and tasteless jokes won't ever be seen by their kids, and that can really mess someone's head up. Hopefully, we'll have moved on past Twitter by the time their baby girl can read.

Then again, if Kanye did cheat and they adopted the baby or something, that's totally their business. But any "critical thinker" would just believe Kim and her doctor. For what it's worth, Kardashian didn't love being pregnant the first two times, but she was on the fence about using a surrogate, too. It's a tough decision to make!

Kardashian told E! News last year that having a surrogate is not the easy way out, in any way. The cost alone makes it prohibitive for so many people, so she obviously knows it's a privilege. But it came with another set of problems. According to E! News, she said:

I think it is so much harder to go through it this way, because you are not really in control. And, you know, obviously you pick someone that you completely trust and that you have a good bond and relationship with, but it is still ... knowing that I was able to carry my first two babies and not, you know, my baby now, it's hard for me. So, it's definitely a harder experience than I anticipated just in the control area.

And if you watch Keeping Up With The Kardashians, you know how much being a bit of a control freak runs in their family.

People are hard on the Kardashians, and I totally get it. They're reality stars who are so wealthy and lead lives so different from our own, it's hard to actually relate to them. Sometimes, they seem really out of touch with the world. But that shouldn't mean that people have the right to trash them and make really absurd allegations about their marriage and their children.

Then again, it looks, from the outside at least, that the family is having a great year. There's new babies, her business is booming, and enough going on that they don't even have to pay attention to the haters. Not like they would anyway.