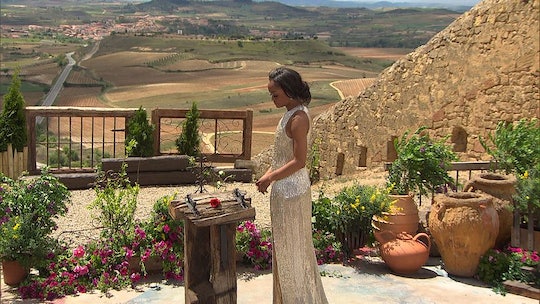 People Are Freaking Out Over Rachel's 'Bachelorette' Finale

Every season of The Bachelorette has its dramatic moments and even more dramatic contestants. Rachel’s season was no exception, right up until the very end. This is probably why people are freaking out over Rachel’s Bachelorette finale and everything that led up to it. Some can’t believe that Eric was sent home at all, while others are still reeling over Peter’s devastation, because weren’t so many of us rooting for him in a very big way? Bryan hasn’t been without his own fans, but because he’s also managed to be virtually drama-free and all around smooth this season, he definitely gained some criticism among Bachelorette fans, even if he didn't necessarily deserve it.

Rachel’s Bachelorette finale was full of the drama and heartache that seemed to make up a lot of her season as a whole, so it wasn't surprising to see how crushed her last two eliminated contestants were and likewise, it was pretty much expected for Rachel to be emotional throughout it all too. Even though she seems to stand behind her decision to send Peter home early after their essential break-up, it's still unclear if Rachel did choose Bryan since he was her last suitor. Because of the unorthodox way the season has panned out, fans are naturally confused, talking about The Bachelorette season finale and the hope that we’ll see some of Rachel’s cast-offs again.

From the beginning of the season, when DeMario was caught lying about a possible girlfriend/casual friend with benefits back home and Rachel eliminated him on the spot, her season of The Bachelorette has been full of the kind of drama fans have come to expect from the franchise. Not only that, but there was plenty of tears to go around this season. Rachel, along with plenty of her contestants, cried quite a bit throughout the season and on the finale as well, so it was definitely an emotional ride to get to The Bachelorette season finale and Rachel’s final choice.

Some might say that Rachel picking Bryan was predictable after all of Peter's reservations about proposing, but since it is The Bachelorette, anything could have happened. Even if your heart broke along with Peter's after his tear-filled exit from The Bachelorette, it's pretty obvious that Rachel found happiness with Bryan after all of the drama and heartache from her season. It was unfortunate for Rachel that her season and season finale ended up being so dramatic and emotional, but it seems like for her, it was probably all worth it.