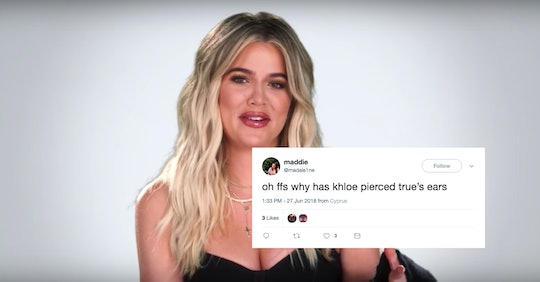 There are so many divisive issues in the world these days. Politics, religion, and, of course, whether or not the Kardashian and Jenner women are "good" parents. Really, the way people talk about the family on social media, you'd think literally nothing else in this world was important. Most recently, people think that Khloé Kardashian pierced True's ears, and they are not pleased. But will anyone ever be pleased about anything a KarJenner does? Unlikely.

On Wednesday, Kardashian posted an Instagram Story showing off all of the decorations and gifts her friends and sisters sent her for her 34th birthday. In one particular shot, she's holding True in her arms and there's a glimpse of something sparkly in the baby's ear. Is it an earring or just the Instagram filter? It's tough to tell. Luckily, there's more evidence to obsess over. Earlier this week, Tristan Thompson, True's dad, also posted a Snapchat with his daughter. And the same little glimmer can be seen on the ear visible to the camera.

On social media, people have feelings about the reality star and Good American designer taking it upon herself to pierce True's ears, given that she was born in early April and doesn't exactly have a say in the matter. But is it really that bad?

A few fans were happy for her. One person tweeted, "Awww baby True got her ears pierced," with a little smily face emoji. But that's about as kind as they got. Most people were worried that she was too young to have her ears pierced, and that Kardashian was cruel to submit her kid to any kind of pain at all.

Although it's debatable just how much a piercing hurts for a newborn. According to the American Academy of Pediatrics, piercing a newborn's ears is totally safe as long as it's done by a professional in a sanitary setting. However, the AAP does recommend waiting until a child is old enough to care for the piercing themselves to best prevent infection. But a parent of a newborn can also easily take care of a new piercing.

You definitely want to talk to your doctor before getting a newborn's ears pierced, as there are a number of health conditions that can result from a piercing. Infections, allergies to certain metals, and even staph infections can occur in about 24 percent of the population with piercings, according to John Hopkins Medicine. As a parent, piercing your child's ears is a personal decision, and Kardashian likely did all the research necessary to ensure her daughter's well being. If, of course, those little ears are actually pierced. Those little sparkly dots could also be stick-on earrings or something else for the birthday party.

There are also a lot of reasons people pierce their ears. For some, piercing a baby's ears is a cultural or religious rite of passage. It's really condescending to assume that a parent would be irresponsible with their child's ear piercing or not check in on it and make sure it's clean while its healing. Of course Kardashian is checking True's ears every time she picks her up to make sure her piercing, and every other little part of her daughter, is healthy. You'd do the same, right?

Sure, there are issues about a baby being able to choose what they want to do with their body, but if you think ear piercing is a violation of bodily autonomy, then so is circumcision or even giving a kid a haircut.

So let little True live with her (possible) piercing and stop shaming her mom for accessorizing her. All parents have their own ways of dressing up their kids, so trust that Kardashian is just doing her best, much like every other parent out there.