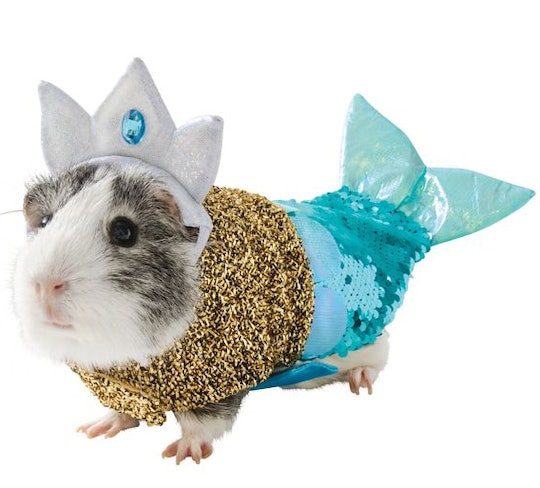 When your babies are little, every Halloween costume you put on them is utterly adorable, whether you're dressing them up as a superhero or a taco. The same goes for dressing up the family dog or cat: Instant cute. But why should Fido and Fluffy have all the fun on October 31? Now, even cage-dwelling critters can play along thanks to these PetSmart small pet costumes for guinea pigs.

The new Thrills & Chills costume collection from PetSmart is designed specifically for guinea pigs. To say that it’s cute is an understatement. The tiny size of the costumes alone is just precious. And since guinea pigs aren’t necessarily a pet that you might think to dress up for Halloween, it makes the costumes that much cuter.

Quite possibly the best part of all, however, is the price: Each of the costumes is $7 or less. Which means you might want your guinea pig to wear one outfit for family pics and another one for your town’s pet parade. Here are just some of the guinea-pig-specific disguises you’ll find at PetSmart.

Your little guinea pig is already busy as a bee in his cage. So why not dress him up in yellow and black stripes? The Bumble Bee Small Pet Costume ($6) is absolutely adorable and even has antennas, too.

If you’re having a Halloween fiesta, your little companion will certainly look the part with the Sombrero Small Pet Costume ($6). The ensemble comes complete with a traditional poncho and a Mexican sombrero with itty bitty balls.

Sure, she might be small, but your guinea pig is mighty, too. So show off her superpowers with the Super Hero Small Pet Costume ($4). Being a caped crusader has never been so cool. And guys, it comes with a mask.

When it comes to costumes, you sometimes you just can’t beat the classics. The Pumpkin Small Pet Costume ($6) boasts a bright orange pumpkin and has a headpiece featuring the stem of the pumpkin.

There are plenty of other options available, too. Although Shark Week might be over, that shouldn’t stop your guinea pig from taking a bite out of Halloween. And there’s no better way than with the Shark Small Pet Costume ($7). It’s kind of a toss up if your pet is the shark — or being swallowed by one. And if you want your girly girl gerbil to get her glam on, she’ll shine in the Mermaid Small Pet Costume ($6). It’s full of glittery goodness, and comes with a shiny silver crown with a sapphire in the center.

But a word of caution: these guinea pig costumes aren’t meant to be worn for hours on end. As the PetSmart site warned, you should only dress up your pet for a few hours max. In terms of fit, make sure that you can put two fingers in between the costume and your precious pet to keep them comfortable. And keep in mind that guinea pigs aren’t as sturdy as, say, a dog or a cat. So if you do decide to take them out for some trick-or-treating, you’ll need to keep them safe as well as warm. Small pets prefer an ambient temperature of 65-75 degrees, according to PetSmart, so you don’t want to take them out if nighttime temps start to drop.

If you have other small pets, according to a representative from PetSmart, these costumes can also be used for "small & calm rabbits, as well as toy-breed dogs." (For rabbits, just make sure the back feet are not confined at all.) Gerbils, however, are too small for these costumes. For bigger animals, check out the entire PetSmart Thrills & Chills collection, with toys, pet beds, and costumes perfect for your pooch or kitty. That way, all of your pets will have a bewitchingly good time on Halloween.